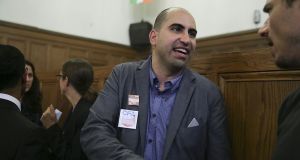 An academic who became a test case for academic freedom in the US said he had no regrets for sending anti-Israel tweets.

Dr Steven Salaita, a Palestinian-American, sued the University of Illinois when they withdrew an offer for a position as associate professor following a number of tweets that he sent following the Israeli invasion of Gaza in 2014.

Among the tweets Dr Salaita sent were “If you’re defending #Israel right now, you’re an awful human being” and “if Netanyahu appeared on TV with a necklace made from the teeth of Palestinian children, would anybody be surprised?”.

He also tweeted after three Israeli teenagers went missing: “You may be too refined to say it, but I’m not: I wish all the f***ing West Bank settlers would go missing”.

The offer of tenure was withdrawn, but Dr Salaita successfully sued the university and its chancellor lost her job.

Dr Salaita told a conference on academic freedom in Trinity College Dublin that he had been unable to get a job in an American university since.

Though he won his case, he said criticising Israel amounted to a “lifetime punishment” in the US and that he was regarded as too controversial to be hired again.

“Running foul of pro-Israel groups in academia is a lifetime punishment I promise you,” he said. However, he said if he could go back he would send the same tweets again.

Dr Salaita said the issue of Palestine was “toxic” in academia in the US and most academics sought to avoid the subject.

Dr Salaita defended the tweet he sent about the missing Israeli teenagers who were later found dead. He said when he wrote about wishing the settlers would go missing, he was not advocating their kidnapping or murder. Instead, he was advocating that the settlers leave Palestinian lands.