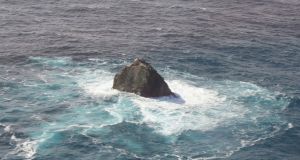 There is an “increased risk” that Scottish authorities will take enforcement action against Irish vessels operating in the waters around Rockall, the Government has said, as issues regarding access rights remain unresolved.

In a joint statement, Minister for Foreign Affairs Simon Coveney and Minister for Agriculture, Food and the Marine Charlie McConalogue, said they are engaging with Scottish and UK authorities to discuss Ireland’s long standing fishing tradition in the area.

Tensions resurfaced on Monday over fishing access when the Donegal-based Northern Celt was blocked by the Scottish marine authority and told they could not fish within 12 nautical miles of the uninhabited island.

The Scottish government confirmed Marine Scotland carried out a “routine inspection” on a vessel in what it said were territorial waters. A spokesperson said Marine Scotland is responsible for monitoring and enforcing fishing laws relating to Scotland’s marine areas and regularly monitors the waters surrounding Rockall.

Rockall is a small uninhabited rock approximately 230 nautical miles north-west of Donegal and 167 miles west of deserted Scottish island of St Kilda. The incident this week reignites an ongoing dispute between the fishing industries of Ireland and Scotland around access rights.

The joint statement from Mr Coveney and Mr McConalogue said they were “considering all options for further engagement on the issues involved”.

Taking into account the new EU-UK Trade and Cooperation Agreement, negotiated as part of Brexit, the issue may require contact with the European Commission, the statement continued.

It said there “remains an increased risk of enforcement action” from Scottish fisheries control authorities against Irish vessels in waters around Rockall.

The UN convention on the law of the sea stipulates that an island incapable of sustaining human or economic life cannot be subject to an exclusion zone.

However, the Scottish government says the Fisheries Agreement negotiated between the EU and the UK Government enables EU vessels to enter UK territorial six-to-12 nautical mile zones only in the English and Bristol Channels. It claims Rockall sits within the UK’s 200 nautical mile Exclusive Economic Zone, and there is no right of access for non-UK vessels to fish in these waters.

It remains the Scottish government’s position that non-UK vessels must have a licence to access the 12-mile zone around Rockall.

“As per long-standing arrangements, Marine Scotland has reported the breach of licence conditions to their Irish and UK counterparts. We will always engage constructively with our EU partners in ensuring the sustainable management of fish stocks is at the heart of our partnership,” the spokesperson added.

Irish fishing boats are steering clear of the waters surrounding Rockall until a diplomatic resolution can be found for access to the area, according to Sean O’Donoghue, chief executive of the Killybegs Fisherman’s Organisation.

“No Irish vessel is inside the 12-mile zone at this time. I would think they are obviously concerned by what happened on Monday,” he said.

Mr O’Donoghue reiterated that Irish fishermen do not accept Scotland’s assertion of a 12-mile no-go zone.

“We are hoping that the diplomatic solution that was found two years ago will be found this time as well and the status quo that has been there for decades will prevail,” he added.

John Ward, chief executive of the Irish Fish Producers Organisation, said he was not aware of any further vessels being stopped by Scottish authorities since Monday.

He said: “There is absolutely no chance that any of the vessels would take the risk of being arrested by going into those waters.”