More than 54,000 people flew into State over festive period

Almost 1,500 arrived on UK repatriation flights after Covid ban on travel from Britain 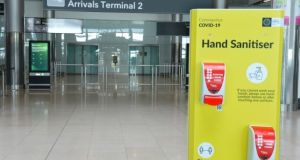 The bulk of the 54,311 people who arrived through the airports between December 21st and January 3rd – some 52,638 – came through Dublin Airport (pictured). Photograph: Dara Mac Dónaill

More than 54,000 people arrived into Dublin, Shannon and Cork airports over the Christmas and new year period, according to new figures from the Department of Justice.

The bulk of the 54,311 people who arrived through the airports between December 21st and January 3rd – some 52,638 – came through Dublin Airport.

Some 1,444 people arrived into the three main airports from the United Kingdom after the Government banned flights from Britain on December 21st to prevent the spread of a new coronavirus strain.

Some 1,160 arrived into Dublin Airport, including 586 between December 21st and 27th and 574 between December 28th and January 3rd, while 284 passengers arrived in on flights into Shannon Airport in the earlier period. These were repatriated Irish people flown back after the travel ban.

The department released the figures in response to queries from The Irish Times about the potential number of people who may be required to provide a negative Covid-19 test.

People arriving from Britain and South Africa will from Saturday be forced to provide a negative PCR test taken within 72 hours of travel under new Government rules announced this week in an effort to curb the spread of more infectious Covid-19 strains from the two countries.

The department said passengers will be told in advance and asked by airlines and ferry operators to present evident of a “negative” or “not detected” test result before boarding a plane or ferry and will be required to present this test to immigration officials on arrival in the State.

Passengers who fail to do so will commit an offence under the 1947 Health Act as amended under 2021 regulations and may be subject to prosecution, punishable by a fine of up to €2,500 and imprisonment for a term not exceeding six months or both.

Overall, the number of airline passengers arriving into the State is down by up to 90 per cent from levels normally seen before the Covid-19 pandemic.