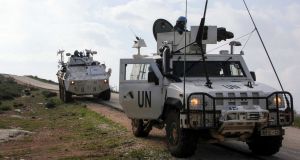 Hundreds of Irish troops serving on a United Nations mission in south Lebanon were bracing this weekend for potential exchanges of fire between Hizbullah and Israel as the fallout continues from the killing of General Qassem Suleimani by a US military drone.

Almost 350 Irish troops are serving with Unifil in south Lebanon at present, in the middle of the conflict zone, should strikes occur as feared.

Neither the Defence Forces nor Minister of State for Defence Paul Kehoe had made any comment early on Sunday.

However, The Irish Times understands the threat level has not been officially increased by Unifil despite the events of last Friday. Iranian military commander Suleimani and Iraqi militia leader Abu Mahdi al-Muhandis were both killed in the US drone strike on a convoy leaving Baghdad International Airport.

Though there had been no official increase by Unifil to the threat level posed to the Irish and other Unifil personnel in south Lebanon, the troops were in recent days undertaking bunker drills and defence drills to ensure their state of preparedness was sharp.

A spokesman for Minister for State for Defence Paul Kehoe TD said: “Following the recent killing of General Soleimani in Baghdad, the military authorities have advised that as a contingency, the UN missions in Lebanon (UNIFIL) and the Golan Heights (UNDOF) have increased their force protection measures.

“There are currently 340 personnel serving in UNIFIL and 130 in UNDOF. The safety of all our military personnel serving overseas remains as always, paramount to the Government. The situation will continue to be monitored closely.”

Sources said in the event of rocket fire, the majority of Unifil personnel, including 336 Irish troops, would remain in bunkers for their own safety.

There were now concerns that US assets and US allies in the region would be attacked in revenge for last Friday’s strike, with Hizbullah rocket attacks from southern Lebanon into northern Israel seen as possible within days.

Military sources said if the feared strikes occurred, Hizbullah would effectively be acting on behalf of Iran in attacking Israel because of Israel’s close relationship with the US.

Any attacks by Hizbullah would probably take the form of Katyusha rockets being launched from south Lebanon into northern Israel, and the Israelis would launch much larger retaliatory strikes, the sources said.

The killing of Suleimani in particular has ratcheted up tensions between the US and Iran, with Tehran vowing to avenge the killing. In turn, US president Donald Trump has warned any attacks by Iran would be met with significant strikes by the US against 52 Iranian sites.

Suleimani was the head of the Iranian Revolutionary Guards’ elite Quds force and one of the state’s most significant military commanders.

Military sources in Dublin said exchanges between Hizbullah and Israel would come as no surprise to the Irish troops and their international colleagues in Lebanon, adding such activity would represent a “typical” pattern of conflict in the region going on for decades.

The same sources added the Irish and other Unifil personnel would be well prepared and well protected if serious exchanges between Hizbullah and Israel occurred, as Unifil – the United Nations Interim Forces in Lebanon – dated back to 1978.

In September, for example, Irish troops spent several hours in bunkers when they were caught in crossfire between Israeli troops and Hizbullah fighters. The Israelis opened up after Hizbullah fired shells at an Israeli army base and targeted an ambulance in response to repeated Israeli strikes on Hizbullah and allied Iranian positions in Syria. Neither peacekeepers nor combatants sustained casualties.

As well as the 336 Irish troops deployed at present with Unifil in south Lebanon, another 130 Irish troops were also part of the United Nations Disengagement Observer Force (Undof) on the Golan Heights between Syria and Israel.

However, while Hizbullah was active in Syria, its presence there was smaller than in south Lebanon. As a result, a Hizbullah attack on Israel via the area the Irish troops were based in on the Golan Heights was seen as unlikely.

As is the case in south Lebanon, the Irish troops serving with Undof on the Golan Heights are not unused to sharp deteriorations in the security climate in their operating area.

Heavy machine-gun fire and mortar fire has fallen close to the Irish base in recent years and a vehicle carrying Irish troops was at one stage damaged by a roadside explosive device.