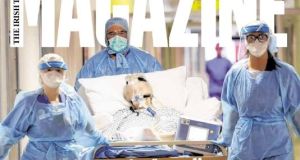 Newspaper Magazine of the Year was awarded to The Irish Times Saturday Magazine.

The Irish Times won six of the NewsBrands Journalism Awards 2020 announced last night, including for the best coverage of Covid-19 for a project documenting the lives of those who have died as a result of the disease.

The awards are being presented over two nights, with the Irish Times winning in half of the 12 categories announced during an online ceremony from the Guinness Storehouse.

Inside Politics, presented by Hugh Linehan and produced by Declan Conlon, won Podcast of the Year for its work in the lead up to February’s general election.

Newspaper Magazine of the Year was awarded to The Irish Times Saturday Magazine, edited by Rachel Collins and Ciara Kenny. The award-winning edition included an inside look at St Vincent’s Hospital during the peak of the Covid-19 pandemic in April.

The judges particularly commended the magazine’s design and layout, as well as its cooking and wine columns.

The Irish Times Lives Lost series, which was edited by Ruadhán Mac Cormaic, won the Best Coverage of Covid-19 category.

In their citation, the judges said the initiative was “a series of obituaries which were absolutely beautifully written”.

“This was an opportunity to read about and learn about the real people behind those figures. It gave a richness to these people; it made them real. When you talk about journalism being one of the first drafts of history, marvellous social history is going to be captured. A marvellous entry,” the judges said.

The awards were open to any work published in print, online, mobile, video, audio or any other news delivery format from any NewsBrands Ireland member title. The Irish Times had the highest number of entries on the shortlist, with 35 nominations. The second half of the awards will be announced on Wednesday night in another online ceremony.

Other winners included Lorcan Allen of the Irish Farmers’ Journal, who was named Business Journalist of the Year for his work investigating Larry Goodman’s empire, while the Irish Independent political team won in the investigative journalism category.

Neil O’Riordan from the Irish Sun won the Sportswriter (Popular) of the Year award, while Fionnán Sheahan and Cormac McQuinn won scoop of the year for the Irish Independent for breaking the story on absentee voting in the Dáil.

Wayne O’Connor from the Sunday Independent was selected as the winner of News Reporter of the Year and The Irish Daily Star won Campaign of the Year.

NewsBrands Ireland chairman Vincent Crowley said Covid-19, from a reporting point of view, has been a real challenge but that newspapers had risen to the challenge.

“I think the last six to nine months have positioned Irish newspapers very well. People will appreciate that value into the future,” he said.

Minister for Media Catherine Martin said the Covid-19 crisis has highlighted more than ever the importance of honest, trustworthy journalism.