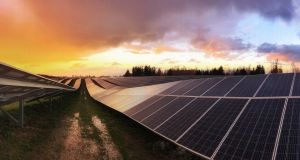 Irish solar energy developer BNRG renewables has struck a financing deal for the first projects in a US portfolio which it predicts will grow to a total value of $375 million (€336m).

The IFSC-headquartered developer signed a financing deal with a consortium of lenders for $40 million. It marks the final stage in the development of its first 33 megawatts (MW) of projects in the US.

The debt facilities for the deal are being provided by CarVal, which has made its mark in Ireland with the acquisition of distressed debt in recent years, and a national lender in the US, SunTrust bank. CarVal is also considering assisting BNRG on other projects in the northeast of the country.

The solar farms, which are a combination of in-construction and operational power plants, are located in Oregon. The first three of seven projects supported by the deal came online in December of last year, with the remaining four expected to power up by September this year.

The company has struck a deal to buy power from the plants, known as a power purchase agreement, with Portland General Electric.

While all development activity by BNRG has so far been concentrated in Oregon, the majority of the company’s development pipeline is located in the US state of Maine. Next year the company will enter into construction on 110MW of projects in that state, followed in the next two years by another 150MW.

The deal also marks the first time that a “pure play” European solar developer has used what is termed “tax equity”, which is a form of financing provided as a support for renewable energy projects by the US government.

“Developers like BNRG are critical to the sustainable energy future of America,” said Jerry Keefe, principal at CarVal investors.

BNRG director Nick Holman said the company was “delighted to close the financing on our first of many US portfolios”.

BNRG has developed a series of projects in the UK and mainland Europe, but last week failed in a bid to get planning permission for a 12MW solar farm in Co Kildare. An Bórd Pleanála ruled that the development, which was a joint venture between BNRG and France’s Neoen, would “seriously injure” the visual amenities of the area.

“The proposed solar farm would form a prominent and obtrusive feature in the landscape, which would be highly visible in views from its environs and would adversely impact on the character of the local setting,” the planning authority found.

BNRG and Neoen have plans to build out up to 200MW of projects in Ireland.

Irish solar energy has attracted increased levels of interest as improved technologies have made it possible to generate power from solar panels in the Irish climate.