‘Breaking down barriers’: Solidarity on the run in Cork City Marathon 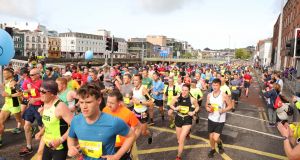 A group of runners promoting solidarity with and wellbeing of asylum-seekers living in Direct Provision played a major part in the Cork City Marathon on Sunday.

Bus Éireann stepped in to provide transport to bring members of the Sanctuary Runners group from the Direct Provision centre at Kinsale Road in Cork to Patrick Street for the marathon.

Over 350 people from accommodation centres nationally and individuals running to support them took part in the marathon, the majority of them in relay teams.

This is a chance to show the world that Cork, and Ireland, is a tolerant, welcoming and decent place

“The Sanctuary Runner concept breaks down the barriers which exist between those in Direct Provision and the rest of us in wider Irish society. Ours is a running group of hope, of solidarity and of decency.”

The group receives funding from Cork City Council and the Tomar Trust.

They collect used gear to redistribute among runners and are hoping to grow to include 20 locations across Ireland over the next 12 months.

The Sanctuary Runners gathered on Prince’s Street in Cork city centre for a celebration to include a Brazilian Samba band and Sudanese drummers.

Mr Clifford said events such as the marathon assist the integration process in Ireland.

“Days like this are so important – not just for those in Direct Provision, but for us as Irish residents too. This is a chance to show the world that Cork, and Ireland, is a tolerant, welcoming and decent place, where people are treated with respect and humanity no matter their legal status or nationality.”

They joined some 8,000 runners taking part in the annual Cork event.

It’s hard to get a fast marathon in Ireland. Last year was calm, there wasn’t a breath of wind. This year was tough

The marathon, team relay and youth challenge got under way at 8.30am, with the half marathon starting at 10.15am.

Gary O’Hanlon of Clonliffe Harriers AC was first over the finish line in a time of 2:21:43, having also triumphed in the event in 2018. Tim O’Donoghue was in second place, and Sergiu Ciobanu was third.

Mr O’Hanlon said he was pleased with his time, particularly given that for parts of the run there was only the width of his vest between him and the other top three runners.

“I am delighted. I knew it was going to be a tough marathon. It was very tight in marathon terms. It’s hard to get a fast marathon in Ireland. Last year was calm, there wasn’t a breath of wind. This year was tough.”

Angela McCann, of Clonmel AC in Tipperary, was the first woman over the line, having previously won the event in 2011 and 2012. She admitted it was a tough race.

“It was tough. I wouldn’t be as fit as I used to be. I struggled a bit. To win it was a huge achievement for me. I never thought I would be back here to run it, let alone win it. I found the last few lines tough. That is marathon running for you. The support on the course was fantastic.”

Nollaigh O’Neill and Megan Armitage were second and third over the line.

Gavin Sweeney was the half marathon winner for 2019. Winning was a “bonus”, he said, and that achieving a personal best time was his goal from the start.

The women’s half marathon winner was Fiona Santry.