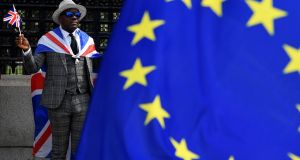 A file image of a pro-Brexit protester stands behind an EU flag outside the Houses of Parliament in London. Photograph: Reuters 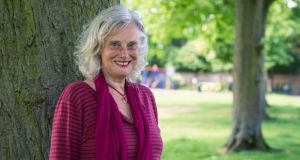 The number of EU citizens turning to therapy to cope with their stress and anxiety over Brexit is on the increase, a mental health expert in Britain has said.

Emmy van Deurzen, a psychotherapy professor who launched a free therapy service for EU nationals two years ago, said her clinic was seeing about 15 EU nationals a week.

Initially it had between 50 and 100 patients a year.

“Almost every EU citizen in the UK has been affected by Brexit to some extent. Some people are just feeling out of sorts, but there are some people who feel they can’t stay here any more and some who just can’t cope who have anxiety, insomnia, are getting panic attacks, feelings of paranoia and suicide ideation [suicidal thoughts],” she said.

Dutch-born Ms Van Deurzen, who is married to a Briton, came to the UK to live and work in 1977.

Her own “kafkaesque” dealings with the British Home Office when she applied for British citizenship left her determined to keep fighting for EU citizens’ welfare, she said.

Her therapists report that Brexit is shattering some EU nationals’ sense of identify and belonging.

Some, who are married to Britons whose families voted leave, say they feel rejected by their in-laws and conflicted in their relationships, and find extended family occasions difficult to cope with.

News of the increase in anxiety comes less than a fortnight after the European parliament election fiasco in which many EU citizens living in the UK were denied their right to vote, leaving them frustrated and angry that they were blocked from having a say over their future.

The sense of limbo endured by many since the referendum three years ago is becoming a strain on mental wellbeing, said Ms Van Deurzen.

She said many clients reported prolonged sleep problems caused by stress, which had a knock-on effect on their energy levels and their enjoyment of life. Others felt very anxious and stressed about their futures and descended into a feeling of depression.

“All have the same sort of underlying complaint which is being unable to sleep for more than four or five hours a night. They feel they can’t let go.

“If you’ve been like this for three years since the referendum in 2016, you are just exhausted. This might lead to other problems, such as panic attacks, and then a low level of enjoyment in life. We have people suffering depression and suicide ideation,” she said.

She has also seen cases of patients suffering paranoia, becoming scared to go out because they might be recognised as Europeans by strangers on the street and be thrown out of the country.

“It is irrational but this is what we are observing,” she said.

“I have written to Guy Verhofstadt [the European parliament’s Brexit coordinator] several times,” said Ms Van Deurzen, who said she had heard similar reports of EU citizens with stress-related illnesses among GP and therapist colleagues.

Known as the Emotional Support Service for Europeans, ESSE, the mental health scheme was launched in 2017 exclusively for EU citizens affected by Brexit, and is provided by volunteer therapists at the New School of Psychotherapy and Counselling in north London.

“That can be very disturbing to people’s sense of self and of worth within a society. They don’t feel validated any more.” - The Guardian