Dublin mini marathon: ‘This year my daughter ran alongside me’ 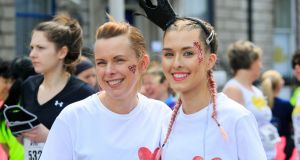 Karen Ward (left) who received open heart surgery 6 months ago and her daughter Kim Ward, from Carrikmacross in Co Monaghan who ran the Marathon for the Irish Heart Foundation. Photograph: Collins 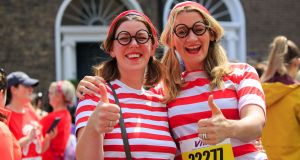 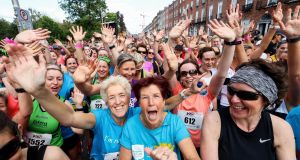 Participants in the 2019 VHI Women’s Mini Marathon in Dublin on Sunday. Photograph: INPHO 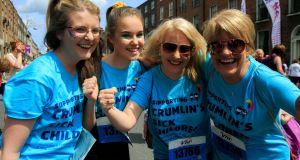 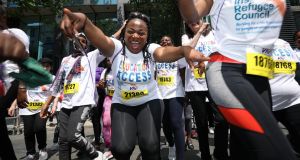 Solange Buhendwa gets ready to race in the VHI Women’s Mini Marathon. She was raising awareness about the barriers to education faced by people in the asylum process.

Liz Collins is a seasoned mini-marathon participant. Every year since the birth of her daughter, she has joined thousands of women in running the 10km route through south-east Dublin.

It was only when she went online to sign up for this year’s event that she discovered her 15-year-old daughter Claudia Scanlon was finally old enough to join her along the route.

One of only 300 people in Ireland with the disease, she has a severe form of EB which means 80 per cent of her body is covered in wounds and even the slightest touch can cause severe pain.

She has to be bandaged almost from head to toe to protect her skin from blistering.

She and her mother were joined on Sunday by friends from Debra Ireland, the charity which supports the 300 people living with the condition here.

“It’s a completely different dynamic because normally I run with her in my heart but this year she’s alongside me so it’s a big day for both of us,” says Collins as she makes her way to the start line pushing her daugher in a pink wheelchair.

Claudia, who will sit her junior cert next week, is determined to raise awareness around her condition so that one day a cure can be found. “I think it’s incredibly important for someone with EB to participate in this event. It doesn’t matter whether you have a disability or not, once you put your mind to it you can do what you want.”

She was also joined by her best friend Emma Grogan along the route. “Once I don’t fall out of the wheelchair, I’ll be fine,” she jokes.

Nearby, Charity Kanyama is grabbing some food with friends before setting off on the 10km route for the first time.

Originally from Zimbabwe, Kanyama joined more than 70 women with the Irish Refugee Council in raising awareness about educational access for people going through the asylum process. Despite the introduction of a pilot support scheme for school leavers in direct provision, only six young people have been granted support for third level since the programme was introduced in 2015.

After three years living in direct provision in Portlaoise, Kanyama is frustrated by the lack of educational opportunities open to asylum seekers. “No matter when we come from everyone needs an education. Even if you come from your country with your own education you don’t get what you want to do here unless you have qualifications in Ireland.”

Rosemary Kunene, who also lives in direct provision in Portlaoise and took part in Sunday’s mini-marathon, agrees that access to education is a key aspect of integration.

“Education is power. People living in direct provision have challenges in accessing education which means that they will be powerless. Also dignity. It gives you dignity as well.”

Taking part in the marathon not only allows people to raise awareness around important social issues, but also gives you a chance to clear your mind, says Kunene. “I’m very conscious of my mental wellbeing and doing this is like de-stressing. You kind of forget your reality, you switch off from direct provision.”

Some 30,000 women from across Ireland took part in Sunday’s VHI Women’s Mini Marathon with Aoibhe Richardson crossing the finishing line at Baggot Street in first place.

The largest all-women’s event of its kind in the world, the mini-marathon has been held each year since 1983 when 9,000 women took part.

The event reached a record attendance in 2014 when 41,006 women were involved. A total of one million women have taken part in the marathon over its 36 years.

For Claudia, who successfully completed this year’s mini-marathon with her mother and best friend by her side, the day was a huge success. “The road bumps were tough, but it was a fantastic experience. I like to be as independent as I can and it’s a great accomplishment for me to reach the finishing line.”