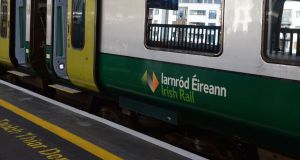 An Irish soccer fan has been awarded €24,200 arising from his summary dismissal by Irish Rail due to his jailing for assault during the Euros in France in June 2016.

Irish Rail dismissed Mr Hunt by letter while he was still in a French prison in September 2016 after telling him that he was unable to fulfil the terms of his contract.

Finding that the dismissal was unfair, WRC Adjudication Officer, Máire Mulcahy said that Irish Rail initiated no contact with the complainant or his family to ascertain the relevant facts.

Ms Mulcahy said that the electrician - who had worked 14 years for Irish Rail before his unfair dismissal - was not given any advance notice, nor offered any procedure or the right of appeal by his employer.

Ms Mulcahy has ordered Irish Rail to pay Mr Hunt €16,472 for his unfair dismissal and an additional €7,728 to compensate him for not being paid any notice.

She said she reduced the unfair dismissal by 80 per cent to €16,472 due to the worker’s massive contribution to his own dismissal.

Ms Mulcahy said that the electrician’s offence was dealt with by the French judicial system and he paid the penalty. She did not accept the prison term was sufficient to frustrate the worker’s contract with Irish Rail.

Mr Hunt was initially jailed for eight months in June 2016 following a street fight in Paris and the jail term was later reduced to five months.

In evidence, Mr Hunt told the WRC hearing that having consumed significant amounts of alcohol and believing himself and a friend to be in danger, he got involved in a fight in Paris.

He was arrested on June 15th 2016 two days after Ireland’s opening game with Sweden which ended 1-1.

Mr Hunt was detained and then prosecuted in the Paris Metropolitan Court, and sentenced on June 17th 2016. He stated that because of a fatal incident at another sporting event, the French judge informed him that he was going to make an example of him.

On September 12th 2016, Mr Hunt had his employment terminated by Irish Rail with the dismissal letter stating “owing to the circumstances of your custodial sentence you will be unable to fulfil your contract of employment over the next number of years”.

Ms Mulcahy rejected Irish Rail’s argument that the case should be viewed as a frustration of contract and not an unfair dismissal.