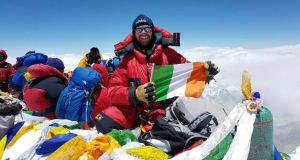 Rob Mortell holds a tricolour at the top of Everest. Photograph: Rob Mortell/Facebook

The youngest Irish person to climb Everest, Rob Mortell from Limerick, said on Friday he was looking forward to getting back to normality after scaling the world’s highest peak.

The 26-year-old, who has become the youngest Irish person to reach the summit, said after a challenging two months living on the side of a mountain he wanted to get home.

Speaking from Everest base camp shortly after completing his final descent Mr Mortell said: “I’m looking forward to normality. I’ve been here for two months, it’s been a challenging time, and an enjoyable time.”

“I don’t know when we’ll get home We are at the mercy of the Chinese in terms of logistics, a lot of gear is still at base camp. It is going to take another few days before we can get home.”

He said there are many costs associated with such a project, “ a financial, emotional, family cost, work cost.

“It is hard to put together. When putting a plan together you have to assess how much you want this, how much you’re prepared to invest in terms of time and finances ,” he told Newstalk radio. He also thanked his employer, KPMG.

“It’s all about everyone pitching in together.” He said the view from top of the world was “pretty incredible”.

“We could see Nepal and Tibet. It is quite special. But what’s special about Everest is that it dwarfs everything around it. There’s nothing close to it.

“We were about two days off target when we did eventually [reach the] summit, but we were able to take shelter further down the mountain.

“The big thing about climbing Everest is that it’s a very personal goal. You can’t really be sure that it’s ever going to happen. There are so many things not in your control. You do your best, put the best foot forward, hope the weather plays ball, that your health is good.”

He said they were unaware of other incidents the mountain while they were preparing.

“On the north side where I was, we were unaware of major issues with other teams. All the teams help each other. We have a doctor on our team. You focus on your own climb and watch out for people around you.

Everest, raising the death toll on the world’s tallest mountain since it was re-opened to expeditions this spring to four.

Sherpas have been searching for two Indian climbers missing since last Saturday.