Irish company to lay off workers in Britain because of Brexit 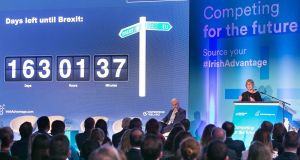 A businessman recognised as Ireland’s Entrepreneur of the Year 12 months ago, has said his company will be laying off workers in Britain as a result of Brexit.

Harry Hughes, chief executive of Co Mayo safety workware producer Portwest, said the company took action after Britain announced 14 months ago that it would be leaving the EU customs union.

Speaking at a conference hosted by Enterprise Ireland to mark the start of International Markets Week, Mr Hughes said Portwest currently has a 250,000sq ft warehouse in south Yorkshire where 250 people work supplying its products to continental Europe.

Enterprise Ireland chief executive Julie Sinnamon told the conference that the number of indigenous Irish companies taking action over Brexit had more than doubled in the last year.

A survey of its client companies found that, as of September 1st last year, only 38 per cent of companies had made provisions for Brexit. By May, the proportion had increased to 85 per cent.

“We are not walking away from the UK. It is and will be our number one market, but we are growing the rest of the world at a faster rate,” she said.

Mr Hughes, whose “world-beating company” was praised when he won the overall EY Entrepreneur of the Year award last October, said Portwest would continue to operate its warehouse in Yorkshire as 40 per cent of its exports are to Britain, but it will be on smaller scale.

“The net effect is that if you are going to halve the amount of goods going through a warehouse, it is going to have consequences for staff,” he said.

He declined to say how many jobs would be lost in the Yorkshire facility and stressed most of those affected would be part-time staff, but he confirmed that the Yorkshire warehouse will halve in size after Brexit.

“Nobody knows what is going to happen with the borders or with duty. It’s a practical decision. We are in quite an unusual position that our big distribution centre is in Britain and our biggest market is in Europe,” he said.

“Most of our competitors are in the right place. We have found ourselves in the wrong position.”

John Brophy, business development manager with the PM Group, an international project delivery company based in Dublin and Cork, said: “We would probably be doing more capital projects if Brexit hadn’t happened. “The multinational companies, which might have invested in the UK, are probably putting their money elsewhere. The nature of the pharmaceutical market is that if you develop a product, you need to bring it to market in a short period of time. Our job is to follow where those projects are going.

“The degree of uncertainty means people will not make decisions when they are going to change their strategy to mitigate the effects of Brexit. Uncertainty doesn’t help anyone make decisions in business.”

Seamus Lawlor, business development manager with Keltech in Waterford city, a contract manufacturing company specialising in manufacturing fuel and hydraulic tanks, said: “The company has been going over 25 years. We would have been very tunnel-focused on the UK and Irish markets up to two years ago. Two years ago because of Brexit, we decided we needed to look further afield, something which we never did before.

“For us it was turning a negative into a positive because, when we approached the European market, we found there was a huge need for our products and our solutions there . . . We feel that whatever happens we will be able to ride it out with that customer base.”

Kilian Cawley, director of PE Services, an engineering equipment business supplying into the agricultural sector and based in Cavan town, said: “We cover all of Ireland, North and South, and the UK as well. When Brexit was announced, it was something we couldn’t believe. We had to embrace the reality. I’m from Monaghan. I know what it was like down the years.

“We have been trying to anticipate what the worst-case scenario would be. There are so many different facets to Brexit – the movement of people being one of them. A lot of our guys will travel to see a customer six times.

“They carry spare parts. All those spare parts would have to be declared. You have a huge issue with the movement of people and never mind the exchange rate risks involved in that.”

James Healy, commercial director for Marco Brewing in Sandyford, Co Dublin, which manufactures water bottles and coffee brewing equipment, said: “Brexit has had three impacts on us. The biggest impact is uncertainty. Uncertainty diminishes the market potential for our products. A lot of our products are sold into markets where there is capital spending in hotels and restaurants. The general vibe in the market in the UK in food services is stagnating.

“The second impact has been the sterling weakness. That has impacted very strongly and immediately a couple of years ago on our products.

“Thirdly you have the whole logistic and customs arrangements post March or post March 12 months. That creates further uncertainty. Our planning is based on a no-deal Brexit. We have to prepare for the worst while hoping for the best.”

How to get ready for a graduate scheme 05:00
Job hunting amid the pandemic: Five pointers to help you find that role 05:00
Coronavirus: Council tenants who have parties ‘risk eviction’ 02:58
Gardaí used spit hoods on at least 14 people with mental illness 02:17
'Worrying trends': Waiting game in play as officials monitor Covid cases 02:04