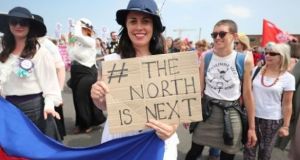 Two-thirds of women polled in Northern Ireland wanted the abortion issue dealt with in the North and not through the House of Lords and the House of Commons. File photograph: PA

Any moves to change abortion legislation in Northern Ireland should be a matter for the people of the North and their elected representatives, a new poll has found.

Details of the ComRes poll were released ahead of a bill being introduced at Westminster next week seeking to decriminalise abortion in Northern Ireland.

The bill is proposed by the Labour MP for Kingston upon Hull North, Diana Johnson. If approved, the bill will be taken to have had its first reading.

The ComRes poll found that 64 per cent of people in Northern Ireland agreed that changing the law on abortion should be a matter for Northern politicians and not Westminster.

The poll also found that two-thirds of women in Northern Ireland wanted the issue dealt with in the North and not through the House of Lords and the House of Commons.

The poll is based on surveys of 1,013 Northern Irish adults online between October 8th and 15th.

“This polling clearly shows that this is not what the people of Northern Ireland, and in particular women, want,” she said.