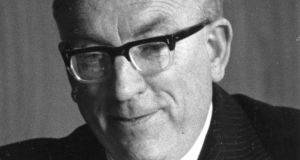 Dr TK Whitaker: A conversation between him and Albert Borschette, the Luxembourg permanent representative to the EEC, is revealed in the latest volume of Irish foreign policy papers from October 1961 to April 1965. Photograph: Tom Lawlor

Ireland would join the North Atlantic Treaty Organisation (Nato) if that was the price to pay to join the European Economic Community, top Irish official TK Whitaker told a senior European politician in 1962.

The conversation between Whitaker and Albert Borschette, the influential Luxembourg permanent representative to the EEC is revealed in the latest volume of Irish foreign policy papers from October 1961 to April 1965.

Published this week by the Royal Irish Academy, a series of documents outline in detail Ireland’s first application to join the European Economic Community (EEC).

The policy was being vigorously pursued by the Lemass government in the face of scepticism from Germany and France that this country would be able to meet the requirements of membership.

In an official note written on January 20th, 1962, for then taoiseach Seán Lemass, Whitaker, the leading official involved in the talks on EEC membership, put on record a conversation he had had at lunch with Albert Borschette, the influential Luxembourg permanent representative to the EEC who went on to become a European Commissioner.

Borschette asked Whitaker if the difficulty Ireland had with Nato, which had been referred to that day in a statement by the taoiseach to the Council of Ministers would still apply if Nato, as he thought likely, was to become the main instrument of the common defence policy of the EEC.

“I said that the taoiseach had not entered any such reservation in his statement which was a positive declaration of full acceptance by Ireland, as a member of the community, of all the political implications of membership . . . We recognised, of course, that a common foreign policy and a common defence policy were implicit in the ideal of European unity and the Irish government had declared its full adherence to this ideal.”

In response, Borschette agreed that no definite provisions regarding common defence had yet been worked out by the committee looking into the issue but he thought it likely that, in order to avoid duplication, use would be made of Nato as an organ of that policy. He asked if this would be a stumbling block to the Irish government.

“I replied that, if Ireland was a member of the community and the community decided that Nato should be used as an instrument of a common defence policy, I felt sure the Irish government would, in the new circumstances, be prepared to reconsider their position in relation to Nato.

“I asked M Borschette whether a question would be put to us on this point and he replied that the formal questionnaire would probably be confined to economic matters and important political questions such as the one we had been discussing would be reserved for oral discussion with ministers. I reported this conversation to the taoiseach, to the minister for industry and commerce and (on my return) to the minister for finance.”

The conversation took place after Lemass in his statement to the Council of Ministers in Luxembourg seeking support for this country’s application said that while Ireland did not accede to the North Atlantic Treaty, it had always agreed to its general aims. “The fact that we did not accede to it was due to special circumstances (partition) and does not qualify in any way our acceptance of the ideal of European unity and of the conception embodied in the Treaty of Rome and the Bonn Declaration of 18 July last of the duties, obligations and responsibilities which European unity would impose.”

Lemass’s declaration followed a series of sceptical responses to Ireland’s application. In October 1961, one influential voice in the commission, Sicco Mansholt, told the Irish ambassador to Brussels, Donal O’Sullivan, that two countries, Germany and France, had expressed misgivings about our application to join.

A crucial European Council meeting in January 1962 was an important step towards Lemass’s ultimate foreign policy objective of obtaining membership of the EEC at the earliest possible opportunity. He drove the issue in a slow and painstaking fashion over the following year with Whitaker managing the process. However, serious difficulties arose in convincing influential figures in Brussels that the country had achieved the economic progress needed to join the EEC as a full member.

This was reflected in the record of a conversation in April 1962, between the Irish ambassador to France, Denis McDonald, and Jean Monnet, a founding father of the EEC. Monnet questioned whether Ireland would have the capacity to deal with the demands of free trade.

“Would Irish industry stand up to all this? Mr Monnet said he could not see it. We would have lots of goodwill all round but would we have the capacity, industrially speaking, to do what we hoped? He meant his remarks to be taken kindly, as he wished to be helpful.”

He suggested that Ireland should give special thought to the value of an association arrangement which would give us time to organise ourselves industrially. In response, the ambassador explained that Lemass was determined on full membership and was keenly aware of the ability to Irish industry to adapt to the challenge.

To try to make some headway, Lemass undertook a strategic tour of the capitals of the six members in October 1962. He held meetings with senior political figures including French president Gen Charles de Gaulle and French prime minister Georges Pompidou, West German chancellor Konrad Adenauer and his influential economics minister vice-chancellor Ludwig Erhard. After these meetings, the six seemed more amenable to Ireland joining the EEC.

The Irish began planning for EEC membership by 1964, with 1970 as the “worst-case” date for entry but all of the planning came to naught when on January 14th, 1963, French president de Gaulle effectively vetoed Britain’s EEC application and Ireland’s EEC application stalled.