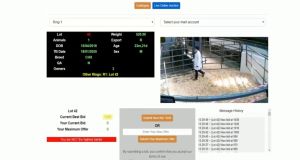 Screengrab of the virtual Carnaross Mart.

Ireland’s first ever virtual mart, introduced to comply with restrictions on social gatherings during the Covid-19 pandemic, has proven highly successful, according to the operators.

“It went very well - we sold 150 bullocks and 50 heifers and a few dry cattle - the farmers were dropping off their animals from 6am this morning and we had viewing on line from 10am until midday,” he explained.

The animals were weighed before they entered the ring and all their information was displayed on the virtual mart board as it would be on a real mart board which would normally be available to farmers attending the mart.

“The sales started at 12 and finished up around half past four with farmers viewing the animals on line and then bidding took place over the phone in real time and the prices generally were good for this time of the year.”

Mr McElroy said that yearling heifers were fetching €2.10 a kilo while good 500 kilo continental store cattle were fetching €2.35/ €2.40 a kilo and both buyers and sellers seemed happy with the trade.

“We’ld normally sell 500 or 600 animals at our Monday mart so the numbers weren’t as big as usual but there was a good trade and people were glad to be able to buy and sell cattle as we haven’t had a mart for two weeks.”

He said Carnaross would usually attract 150-200 farmers to the Monday mart but while there were no farmers present on Monday , at one point over 900 people were watching proceedings online so there was great interest in the sales.

“We had farmers bringing cattle from Meath, Westmeath, Cavan, Monaghan and Louth and we sold animals all over the country - we’re sending cattle to Wexford, to Kilkenny and to Laois this evening so there was good interest.”

Mr McElroysaid Mullingar-headquartered company, Livestock-Live had first installed its agri-software at the mart in January 2018 which allowed the mart to start using web-based technology.

“Livestock Live installed cameras and tested its online bidding platform - one key aspect for them was to be sure the animals could be seen as real to life as possible, and the streaming of online bidding was in real-time with no delay.”

Mr McElroy said that Livestock-Live finalised their testing of the software at Carnaross’s cattle sale on March 24th, just a day before the Dept of Agriculture announced the closure of the marts to curb the spread of Covid-19.

But last week, Minister for Agriculture, Michael Creed announced that his department would allow livestock marts to reopen to provide limited services once some way could be found to adhere to social distancing guidelines.

“As soon as the announcement was made last week, Livestock Live were on to us and they uploaded the latest software they had developed to bring the mart back online so we could run a completely virtual mart.”

Mr McElroy instanced the fact today’s mart was run with just six people at the premises, thus ensuring that the Government’s guidelines on social distancing were fully complied as auctioneer James Fox comfortably handled the bidding.

“There’s not really a glut of cattle on the market at the moment but there’s a want at both ends - a want to sell and a want to buy - and this technology allows us to do that so it’s definitely the way to go, at least for the time being.”