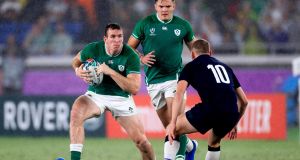 Chris Farrell of Ireland takes on Finn Russell of Scotland in Yokohama on Sunday. The fears and worries of Ireland’s scalding defeat in Twickenham in late August were definitively put to bed. Photograph: ©INPHO/Craig Mercer

Sayonara, Scotland. The rain returned and so too did Ireland’s form on the rugby field as they opened their World Cup in Japan with a formidable dismissal of old foes Scotland.

Joe Schmidt’s men bossed the game all evening, finishing with a 27-3 win over the crestfallen Scots. The Ireland carnival moves to Shizuoka on Monday and Schmidt immediately began to turn his mind to what promises to be a fascinating meeting of cultures – and rugby styles – when they meet the host team Japan next Saturday.

The Celts brought with them all the trappings of this ancient rugby fixture – the tartan, the shamrock, the droning bagpipe, the wee nip of single-malt and even a misty rain that could have been transported from the Highlands to downtown Yokohama. In the long build-up to this match, there had been a slightly barbed atmosphere, with the Irish camp cagey about the health of their backs while the Scots’ fullback Stuart Hogg merrily proclaiming that they were here not just to win this game but the whole shebang. If so, they are now going to need at least one miracle.

After just half an hour, the Scottish team had become sucked into the hopeless place that comes with playing against a Joe Schmidt Ireland team operating at maximum efficiency and with lethal purpose. The Irish made three visits inside Scotland’s 22 within that period and came away with three tries, all finished with crash-over scores from forwards James Ryan, captain Rory Best and Tadhg Furlong.

All of Scotland’s optimism and planning came apart when it met the green monster that Schmidt’s defensive set-up has become. Suddenly, the fears and worries of Ireland’s scalding defeat in Twickenham in late August seemed like a distant memory.

“It’s a nice stepping stone to where we want to go,” allowed Jacob Stockdale afterwards.

“We’re not going to call ourselves world beaters yet.”

It was 19-3 at half time. The fans from both sides amused themselves by belting out a rousing version of the old Japanese favourite, Country Roads. The Scots had travelled thousands of miles to see not very much – apart from a thrilling fourth try for Ireland finished by Andrew Conway. At least the rain made it feel like home. The carnival moves to Shizuoka on Monday morning as Ireland prepare for what will be an evocative occasion next Saturday against the Brave Blossoms.