Intriguing contest for third seat in European election in North 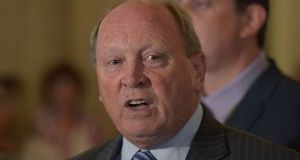 Jim Allister: the Traditional Unionist Voice leader could have a chance of sneaking the third seat if he decides to run. Photograph: Getty Images

The decision, however by Ulster Unionist Party (UUP) outgoing MEP Jim Nicholson not to seek re-election, together with the difficulty of predicting how the Remain-Leave Brexit breakdown in Northern Ireland will affect voting, has raised the possibility of a tight three- or four-way tussle for the final seat.

The SDLP and Alliance are seriously considering running their respective leaders Colum Eastwood and Naomi Long in the election, while former UUP minister and Assembly member Danny Kennedy has emerged as the frontrunner to replace Mr Nicholson.

The Traditional Unionist Voice leader Jim Allister, if he decides to run, also could have a chance of sneaking the third seat.

SDLP and Alliance sources said that both Mr Eastwood and Ms Long were contemplating running for Europe.

The UUP is scheduled to meet on Saturday to select the party’s candidate in advance of the May 23rd European Parliament election. After 74-year-old Mr Nicholson said he would not be recontesting the seat he has held for almost 30 years, Mr Kennedy, who lost his Assembly seat in Newry and Armagh two years ago, said he would be seeking the nomination.

A Traditional Unionist Voice source said the party was “teasing out” the pros and cons of whether its leader and North Antrim MLA Mr Allister should stand again.

A further complicating factor in the election will be the turnout considering that if Brexit does finally go ahead then the three MEPs will quickly be out of their jobs.

Mr Attwood only lost out on the eighth and final count in 2014, when Mr Allister’s transfers got Mr Nicholson over the line.

This would indicate that were Mr Eastwood to run he would have a reasonable chance of taking the third seat from the UUP, particularly should the Remain vote rally to his cause.

Based on the figures he would appear to have the advantage over whoever Alliance chooses as its candidate as the SDLP was more than 37,000 votes ahead of Alliance in 2014.

Currently Alliance is deciding whether to field Ms Long or its Brexit spokesman Stephen Farry, with one senior source suggesting its leader is likely to be the runner.

There would be a risk for Mr Eastwood should Mr Long be selected as based on her centre-ground popularity she is likely to have a good chance of garnering a significant portion of cross-community votes, notwithstanding that the SDLP was so far ahead of Alliance five years ago.

Mr Kennedy is viewed as a moderate and popular unionist and would be in a good position to hold on to Mr Nicholson’s vote.

Mr Allister would also be likely to poll well.

It all adds up to an intriguing and uncertain battle for the final seat to an election which, after all the votes are counted, might become meaningless.