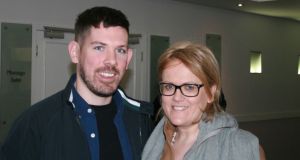 The number of UK-based Irish nurses looking to return to Ireland to work within the HSE has seen a “sharp rise” according to organisers of a Nursing & Midwifery Job Fair held in London at the weekend.

Recruiters from Dublin’s Beaumont and the Coombe maternity jospitals as well as other Irish hospitals were in London on Saturday, hoping to lure nurses working in the UK to work in Ireland.

While Irish citizens will retain their rights after Britain leaves the European Union, Brexit was a push factor.

“Brexit was a contributing factor for me looking into going back home,” says 22-year-old Irish student nurse Caoimhe Ludden. “I’m like everyone else in London who just thinks the whole [BREXIT] thing is a joke.”

Even though she has a job waiting for her in London once she graduates from London Southbank University, Ms Ludden said she hopes to find work in Ireland, so she can return home to Balbriggan, Co Dublin.

“London is not somewhere I want to be,” she admits. “When I moved over I was excited about being somewhere new, but then I realised that Ireland is home.”

Between 2017 and 2018, almost 4,000 EU nurses and midwives left the NHS register, according to figures from the UK’s Nursing and Midwifery Council.

Thomas Jayan, recruitment officer at the Coombe Women & Infants University Hospital, attended the event to hoping to entice highly-qualified Irish midwives who trained in the UK to work in Ireland.

“When we speak to Irish students based in the UK, they say they are scared about the impact of Brexit,” says Mr Jayan.

“Many of them want to come home when they finish their studies because of all the uncertainty over here.”

As well as staff leaving, the NHS has experienced an 87 per cent drop in applications from EU nurses.

“We would have lots of people from Spain and France coming in [TO IRELAND], but they don’t stay long, so they are only a short-term investment,” said Mr Jayan. “Our main focus in being here today is to recruit Irish people.”

Martin Higgins (32) an operational matron working in north west London does not believe his position will be affected after Brexit. “People are leaving for different reasons, it’s not just Brexit. Some of the Europeans don’t like the target focused nature of the NHS which is very different to what they’re used to in their own countries.”

However, those leaving the HSE were also inevidence at the jobs fair, including 41-year-old pediatric nurse Cara McDermott who moved to the UK in February of this year in search of a “better standard of life” as a nurse.

“The state of nursing in Ireland is just awful,” she says. “It is just so short-staffed; it’s an accident waiting to happen. It’s very stressful because you can’t care for people properly.”

Ms McDermott rushed her moving plans to ensure she arrived before March 29th - the date Britain was supposed to exit the EU - in case the immigration system changed.

Ms McDermott says the move is the best thing she has done.“I think anyone who is struggling within the HSE and wonders about coming over here should just do it and not think twice.”