Minister for Sport Shane Ross has told an Oireachtas committee the entire FAI board intends to step down. Video: Oireachtas TV 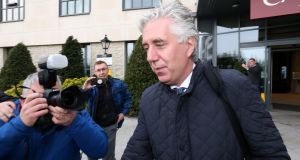 Former FAI CEO John Delaney: Three members of the board were aware of the €100,000 loan from Mr Delaney at the time the financial statements were signed off. Photograph: Colin Keegan/Collins

The Office of the Director of Corporate Enforcement (ODCE) should investigate whether members of the FAI board were required to tell auditors about John Delaney’s €100,000 loan, a leading expert in corporate governance has said.

Prof Niamh Brennan of UCD’s College of Business said under company law, corporate financial statements must contain a declaration that directors are not aware of any relevant audit information which has not been provided to auditors.

“One would expect the ODCE to investigate this as well as all the other matters,” Ms Brennan told The Irish Times.

All relevant audit information is defined as information needed by the company’s auditors in connection with preparing their report.

Penalties for directors who are found to have knowingly included a false statement can be serious. Under the Companies Act, if the statement is false, directors who knew it was false or failed to take reasonable steps to prevent the report being approved can be fined up to €50,000 or imprisoned for a term of up to five years.

Ms Brennan further pointed out that the language in the Act and the FAI accounts make it clear each director has an individual responsibility to ensure they are compliant with the statement on relevant audit information, as opposed to a collective responsibility.

“What I think is really interesting about the declaration is that each individual board member would be signing up to that statement,” she said. “It’s not the board making the statement, it’s each individual director.”

Earlier this week, Deloitte filed a notice with the Companies Registration Office (CRO) stating that proper accounting records have not been kept by the association. The regulatory filing must be submitted if auditors form the opinion that the company is contravening, or has contravened, certain sections of the Act.

According to the form, which was filed with the CRO on Monday, Deloitte believes the company is contravening section 281 and section 282 of the Companies Act, which relate to the obligations and requirements to keep adequate accounting records.

The CRO is then required to forward a copy of this notice onto the ODCE. The filing of the form, which is called a H4, is a very rare event in Irish corporate life. The filing relating to the FAI is the first filed this year, and only four have been filed since the beginning of 2018.

The FAI did not respond to queries.