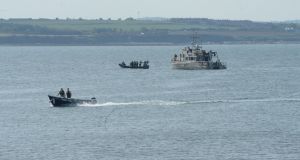 An investigation is due to begin this week into the death of a young Skerries fisherman after his vessel capsized and sank within sight of the north Dublin shoreline.

The body of Jamie McAllister (28) from Skerries was recovered by Garda divers close to the location of the half-decker on Saturday morning.

The young fisherman’s uncle, Keith McAllister, was rescued by the RNLI Skerries inshore lifeboat shortly after the incident, which occurred at about 1pm on Friday.

The Marine Casualty Investigation Board (MCIB) is expected to interview Mr McAllister when he has had time to recover. The two men had set to sea for razor clam fishing, and winds were force four south-easterly at the time.

Extensive air and sea searches were tasked after the alarm was raised, extending from south of Lambay island up to Balbriggan.

The Geological Survey of Ireland research vessel RV Keary (italics) confirmed the location of the missing man with sonar equipment on Saturday morning, before Garda divers recovered his body.

Family members and friends were gathered in Skerries when the local lifeboat brought the crewman’s body ashore for formal identification. Mr McAllister’s uncle had been taken to hospital for treatment on Friday.

RNLI area lifesaving manager Owen Medland said that it was very sad for the families, and paid tribute to all those involved in the search.

Earlier this year, the RNLI Skerries and Clogherhead lifeboats rescued crew from a razor clam vessel off Balbriggan, and there have been several more incidents involving boats involved in this activity.

An MCIB inquiry into the capsize of a razor clam vessel close to Rosslare harbour, Co Wexford, in February 2015 highlighted the “high risk” of vessels fouling gear or picking up heavy objects in the dredges on shallow grounds.

The razor clam fishery, which has a valuable export market, involves at least 30 vessels in the Irish Sea, using dredges in shallow water to harvest the shellfish in a depth of up to 14 metres.

In the Rosslare incident, the quick actions of the RNLI Rosslare lifeboat and local fishing vessels saved the crew of three. The crew had noticed that the dredge was heavier than normal, and hoisted it to the surface - only to find a large boulder.

The skipper trimmed the vessel and came aft to assess the situation. However, a swell caught the hull and it rolled, throwing the three crew into the water. None of the three had personal flotation devices on at the time.as required by fishing vessel regulations.

The MCIB determined that the lack of protection bars at the dredge mouth allowed the large boulder in, and the lack of restriction on the power of the winch allowed the vessel to lift the boulder to the point where it was dangerously unstable.

1 One hundred Irish retailers for all your online Christmas shopping
2 Covid-19: Pressure over breakdown in tracing system intensifies as State enters Level 5
3 Miriam Lord: All test and no trace makes Jack, and heaven knows who else, a very ill boy
4 Gym owner plans to defy restrictions and open
5 Des Bishop apologises to Traveller community for comments in interview
Real news has value SUBSCRIBE