Scheme to protect farmers from claims by walkers with Attorney General 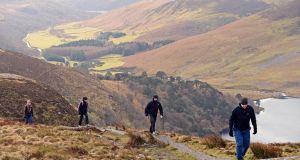 The long-promised insurance scheme could open up greater access to uplands for walkers. Photograph: Eric Luke / The Irish Times

Incoming Minister for Gaeltacht and Islands Sean Kyne has forecast a long-promised insurance scheme, which could open up greater access to uplands for walkers, may be rolled out next year.

Mr Kyne, whose promotion to Cabinet is subject to Dáil approval next week, has said an indemnity scheme to protect farmers in upland areas is with the Attorney General’s office.

“We hope to see the outcome of that advice shortly, it will be assessed in relation to two pilot schemes and extended nationally next year,” Mr Kyne said, speaking at a Mountaineering Ireland conference in Clonbur, Co Galway.

Mr Kyne said he had spoken to Mr Ring on the issue and understood that the scheme, which would provide insurance for farmers against potential legal claims, would be tested in several mountain access areas initially.

The two mountain access projects are being piloted on Binn Shléibhe or Mount Gable near Clonbur on the Galway-Mayo border, and the MacGillycuddy Reeks in Co Kerry.

The pilot projects involve access to a defined mountain area in voluntary agreement with farmers. Both were first proposed by advisory body Comhairle na Tuaithe in 2009, and were backed by the then Community and Rural Affairs minister Eamon Ó Cuív .

However, Mountaineering Ireland hillwalking, access and conservation officer Helen Lawless said both projects have been placed in limbo by the delay by Mr Ring’s department in completing a promised arrangement to indemnify farmers.

Mr Kyne said the Government was committed to outdoor recreation, and said that there had been a doubling in funding for the walks programme to €4 million for next year.

Mr O Cuív, who also spoke at the Clonbur conference, said he did not know why it was taking so long to finalise indemnity, and said he did not think “anyone has a chance in hell” to take a legal suit against landowners after two recent court cases in Wicklow and Donegal.

The Occupiers’ Liablity Act 1995 currently defines a landowner’s responsibility towards recreational users, and its efficacy was tested by a 2016 Circuit Court decision to award €40,000 to hillwalker Teresa Wall who was injured in a fall on a boardwalk in the Wicklow Mountains.

The case was successfully appealed last year by the National Parks and Wildlife Service, but the wording of the act which could place liability on landowners in certain circumstances is still in place.

Ms Lawless acknowledges the surge in interest in walking has tested the goodwill of landowners in situations where gateways may be blocked by private cars, privacy is reduced, and sheep and cattle may be scattered by dogs. She stressed the value of co-operative approaches.

Number claiming pandemic payment drops by 36,000 in a week 12:05
Covid-19: Health bodies asked why answers to committee’s questions appeared in media 11:41
Today expected to be hottest day of the year so far 10:54
Woman threatened by armed men during Cork burglary 10:08
Body of missing five-year-old recovered from Lough Mask, Co Mayo 09:08

1 Trump turns to bible for photo op as DC burns around him
2 Covid-19: Easing of restrictions ‘unlikely’ to be speeded-up
3 Today expected to be hottest day of the year so far
4 ‘Frustrated and angry’: Thousands march in Dublin to protest death of George Floyd
5 Body of missing five-year-old recovered from Lough Mask, Co Mayo
Real news has value SUBSCRIBE