Incinerator would not impact Cork naval base, says Indaver 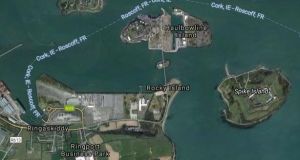 Waste management company Indaver has concluded that its proposed €160m incinerator at Cork Harbour would not impact the safety of helicopters operating at the Naval Service base at Haulbowline. Image: Google Maps

Waste management company Indaver has concluded that its proposed €160 million incinerator at Cork Harbour would not impact the safety of helicopters operating at the Naval Service base at Haulbowline.

An Bord Pleanála had deferred a decision in March on a planning application by Indaver for the 240-tonne municipal and hazardous waste incinerator at Ringaskiddy to allow the company provide more information on whether it would impact on helicopter traffic in and out of the naval base.

It gave Indaver until May 15th to respond to concerns about the impact of emissions from the incinerator chimney stack and whether there might be a need for an exclusion zone around the naval base.

During an oral hearing in April 2016, Cmdt David Browne of the Irish Air Corps said construction of the incinerator so close to Haulbowline would “create a flight safety hazard to Air Corps helicopter operations”.

Cmdt Browne also criticised the use of Civil Aviation Authority (CAA) standards by consultants hired by Indaver when assessing the impact of the development, pointing out that the Air Corps operate to military aviation standards and not CAA ones.

But now Indaver has confirmed it “has taken undertaken a rigorous review of the concerns raised by the Department of Defence” and it has furnished this review to An Bord Pleanála. The facility would generate about 18.5MW of electricity per annum.

“As part of the review, a number of experts were consulted and they have concluded that Indaver’s proposed Ringaskiddy Resource Recovery Centre will not curtail, constrain or, indeed, have any effect on the safety of helicopter operations at Haulbowline naval base,” said Indaver in a statement.

However, campaigners against the incinerator have criticised An Bord Pleanála for giving Indaver extra time to address the issue of helicopter safety and correct inaccurate emission figures that it submitted in support of the planning application in April 2016.

Mary O’Leary of Cork Harbour Alliance for a Safe Environment (Chase) said the repeated time given to Indaver to address concerns contrasted hugely with the pressure put on opponents of the project to meet submission dates before the oral hearing.

“The time given to Indaver to correct their figures and address Department of Defence concerns is a real kick in the teeth for those who scrambled to make submissions and observations on the huge volume of material lodged by Indaver in January 2016, material it turned out was not even correct.”

Ms O’Leary said that the Department of Defence was the sole expert in matters of strategic importance to Ireland when it came to assessing the impact on helicopters in and out of Haulbowline Naval Base.

“Indaver and their hired experts have no jurisdiction in this area. It is of concern that a private company with a vested interest is deemed the appropriate choice for further information on a matter as critical as helicopter safety.

“The Department of Defence and Air Corps have already replied to Indaver’s challenge during the 2016 hearing, stating clearly that the Indaver facility would carry strategic implications for the State.”