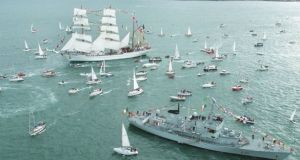 A file image of the LE Aisling taking part in a Tall Ships flotilla off Dún Laoghaire.

The Cork auctioneer who handled the State’s sale of the Naval Service patrol ship LE Aisling for €110, 000 has said he is not surprised if the vessel is now being advertised at multiples of that figure.

A Dutch ship broking agency which purchased the ship at auction in late March is advertising it for sale in “very good condition” but with no guide price on its website.

The Permanent Defence Forces’ Representative Association (PDFORRA) had expressed concern that the price was being quoted at $750,000 - approximately €685,000.

Auctioneer Dominic Daly,who sold the Aisling’s sister ship, Emer, to a Nigerian businessman for €320,000, said he was “delighted” the new owner was”trying to make the best of his purchase”.

Mr Daly pointed out that classification of a ship to meet international surveying standards involves “considerable cost”, and Naval Service ships are not classified.

“Mr [DICK]Van der Kamp would have had to pay for reclassification,which involves putting the ship in dry dock, along with fuel costs for delivery to Holland,”he said.

Mr Daly said the market for such vessels was far better when the Emer was sold four years ago, but a collapse in the oil and gas servicing business meant there was far less interest from this sector.

“Several security companies involved in anti-piracy work were also notified, but in the end there were only two bidders for the ship, one being an Irish shipowner,” Mr Daly said.

The Department of Defence said in a statement that the auction of the ship was advertised nationally and internationally in maritime publications by Mr Daly and that the selling prices of €110,000 was the best bid made for the ship.

“The Department of Defence is aware of the proposed resale of the former LÉ Aisling for an asking price of $750,000. However, the Department has no trailing obligations in relation to the vessel and any hoped for resale price is a matter for the new owner,” it said.

“The Minister for Defence made the decision to sell the former LÉ vessel by way of public auction to the highest bidder to maximise the return to the Exchequer. No reserve price was set for the sale of the vessel. While the vessel remained in the ownership of the Department, it continued to be a drain in terms of both maintenance and personnel costs and resources. It was also taking up scarce berthage space in the Naval Basin.”

The Aisling – no longer “long éireannach” after its decommissioning – was twinned with Galway, and there was a proposal by Cllr Pearce Flannery to purchase the ship as a floating museum.

Neither Galway city, nor the three African and Asian navies which had made inquiries about the ship, made a bid, Mr Daly said.

A year later, its crew recovered 38 bodies from the wreckage of the Air India plane which was blown up in a bomb attack off the Irish coast, with the loss of all 329 on board.