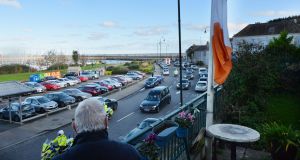 The hearse carrying the remains of RTE broadcaster Gay Byrne passes through Howth on its way to the Pro-Cathedral. Photograph: Alan Betson

As Gay Byrne’s funeral cortège turned down towards the Pro Cathedral in Dublin city centre, 83-year-old Joy Bagster climbed up onto a set of railings to see above the gathered crowd as the broadcaster’s coffin was carried into the church.

“I had to be here, he’s been here all my life so I want to be here at the end of his,” she told The Irish Times.

Travelling out on her own from Rathmines on Friday morning she was among hundreds who joined in a solemn round of applause as the funeral cortège stopped outside the city centre church.

“If it wasn’t for Gay Byrne we’d be in the Dark Ages still because he started things, he got people talking about them,” she said, speaking as the sound of funeral hymns drifted out from the church onto the street.

“Now we might have talked about them between ourselves but he brought it out and then we weren’t afraid, once they heard other people talking about it they were able to join in,” she said.

“He’s part of my growing-up years, he really was. My mother would never miss his radio programme but I was working like. The Late Late Show, it was sacred in our house . . . He was just wonderful,” she said.

As the procession was turning towards the church, two workers ran up from the nearby Talbot Street to the witness the scene. “We’re not even on our lunch break we just legged it,” one said, laughing to the other.

Old and young, pensioners and mothers pushing children in buggies were among the crowd gathered outside the church, as well as a scattering of mildly bemused tourists looking on as people paid their respects.

Earlier the funeral cortège passed by Fairview on its way into the city centre from Howth. Students from St Joseph’s CBS school gathered out on the Fairview footbridge waiting to wave the cortège on as it passed by.

Fiona Barry, one of the teachers in the school said the decision was taken to bring the children out of class to wave on the cortège as a mark of respect.

“Because Gay Byrne was such an iconic character in Irish society and part of our culture ... That we thought it would be nice to come out and pay tribute,” she said.

One of the students Adam McCearn (17) said he had not heard much of the famous presenter before, whose presence had shaped Irish life during much of the latter part of the last century.

“My Dad said they grew up with him . . . When I heard about it first I really had no investment in him, I said, ‘who is Gay Byrne?’” he said.

Serena Berry from Killester walked down to Fairview with her mother to see the cortège and pay respects to the family.

“What Gay meant to us, it’s part of my childhood, the Toy Show, the Late Late Show,” she said.

“For my mother it was ‘get us all off to school’ and have some sanity and listen to him,” she said.

Siobhán Kennedy (56), from Donnycarney, was another Gaybo fan who had come down to Fairview to see the cortège pass.

“Just a mark of respect, for all the work he did for Ireland, opening up all the taboos,” she said.

“Just enlightening the country in what things were going on under our noses that we didn’t know about and for that we will always be grateful to him,” she said. The RTÉ broadcaster brought “issues to the fore” and “enlightened us to what was going on in the country,” she said.