Monika Nawrat (30), originally from Poland, lived in Ireland for over ten years 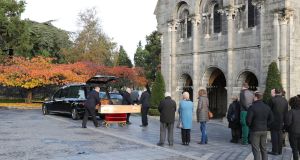 About 30 people attended a funeral service in Dublin on Friday for a young mother who died last month, one week after attempting to take her own life in prison.

Monika Nawrat (30), originally from Poland but living in Ireland for over ten years, died in the Mater hospital on October 14th. She had been on life-support since October 5th after she had attempted suicide in her cell in Dóchas women’s prison.

Ms Nawrat had been remanded into prison custody on October 3rd and was found seriously injured in her cell on the night of October 4th/5th. Six separate investigations are under way into the circumstances of her death including into whether Dóchas officers were appraised by gardaí of her vulnerability.

She had been unable to pay €100 bail at Trim district court on October 3rd where she appeared on foot of a bench warrant issued in September for a public order offence.

While in Garda custody after court she became extremely agitated. An ambulance was called and she was brought to Mullingar hospital emergency department. She was treated, given medication and discharged back into Garda custody to be delivered to the Dóchas centre.

At her funeral in Glasnevin Fr Hugh Gormley, who con-celebrated the Mass with Fr Tomaz Janusz, thanked the small congregation of mourners for being there to remember her “brief life”.

Describing her death as “tragic” he said “her love and her beauty will still be felt by all who loved her.

“There will be a big space, an empty space in your lives now, that Monika once occupied and as long as you live you will always be conscious of that space, that she will not be there. But if it is of some consolation I feel that she will be there in spirit and her presence.”

Mourners were led by her young sons Patrick and Kamil who were with their father.

Also there were friends, neighbours from Bettystown, Co Meath, colleagues from Tesco on West Street, Drogheda and solicitor Dorothy Walsh who acted for Ms Nawrat in a civil matter and who raised concerns about the circumstances of her death.

Representatives from the Polish embassy, the Irish Prison Service and Dublin city coroner’s office, which paid for the funeral, were also present.

Turning to her sons, Fr Gormley said Ms Nawrat would have been “very proud of you today” adding he knew she would be “thinking of you always and remembering you and loving you”.

As her coffin was brought from the chapel for burial one of Ms Narwat’s favourite pieces of music was played - Metallica ballad, Nothing Else Matters. Among its lyrics are the lines: “So close, no matter how far/ Couldn’t be much more from the heart / Forever trusting who we are / And nothing else matters”.

The death is being investigated by the Irish Prison Service, An Garda Síochána, the Garda Síochána Ombudsman Commission, the Inspectorate of Prisons, the Polish embassy and Dublin city coroner.