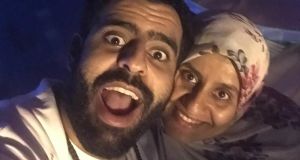 Ibrahim Halawa celebrates his release with his sister Nosayba in Cairo. Photograph via Facebook page 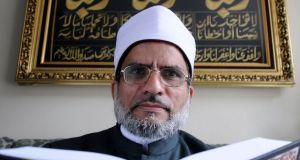 Hussein Halawa said he wanted to thank the Irish Ambassador in Egypt Seán O’Regan for his help in securing the release of his son Ibrahim.

Ibrahim Halawa told his father “Dad, Dad! I left prison! I’m on the streets! Dad, I’m free!”, shortly after his release after four years in jail in Egypt.

Mr Halawa, from Firhouse, Tallaght, Dublin, was released from prison in Cairo on Thursday night, a month after his acquittal on several charges relating to a Cairo protest in August 2013 following the ousting of then president Mohamed Morsi of the Muslim Brotherhood.

The Dubliner, who was 17 at the time of his arrest, was one of 453 defendants in the mass trial which drew criticism for lengthy delays.

In a post on Facebook on Friday, Ibrahim Halawa said: “Finally the day where I can see the sky without bars, smell fresh air , walk freely and smile deeply from the bottom of my heart. But I miss one thing and it’s being home.”

Hussein Halawa spoke on Friday of the exhilaration in his son’s voice when he spoke to him on Thursday night.

“I was speechless when I spoke to him on the phone. I didn’t know what to say. Do I say I missed him, or thank God it’s over, the words were scattered in my mind,” he told The Irish Times.

Hussein Halawa, who is the imam of the Islamic Cultural Centre of Ireland in Clonskeagh, said he spoke to Irish Ambassador in Egypt Seán O’Regan to thank him for his support.

However, Mr Halawa lamented that “the best of Ibrahim’s youth” was spent in prison.

“Yesterday when I was speaking to him he said ‘I’ve left prison a man’,” Hussein Halawa said.

“Four years in a small cell holding sometimes 20 people... When he arrives, we first need to make sure he is in good health, then he can see what he wants to do for his future.”

Hussein Halawa said he wanted to send his “sincere thanks to everyone who supported Ibrahim. It’s not a case of a boy or a family, it’s a case for humanity.”

Three of Ibrahim’s five sisters - Fatima, Somaia and Omaima - were also detained in August 2013 but were released on bail three months later.

Omaima said she managed to video call her brother on Thursday night.

“When I spoke to him on the phone, I was speaking video so it was a different experience. He looked so different that it was very hard for me to hide my reaction of how different he looked. He isn’t a child anymore,” she said.

“I saw his reactions when he was looking at the food, when he jumped on the bed, so to see these reactions, it’s kind of like seeing my son’s reactions when he tries things for the first time. I can imagine that he felt as happy as a child,” she said.

“The way he was talking about the food, the bed, the things in everyday life that we don’t talk really about... He took 15 minutes to talk about a bed and a bathroom. This is how much these things meant to him.

‘Jumping on the bed’

“He kept jumping on the bed and holding the cover and the pillow and saying ‘oh, a bed, a bed!’ and he said ‘my back feels so soft... I don’t think I’ve had this feeling in a long time’,” she said.

Omaima said Ibrahim’s release also brought back memories of when she and her two sisters were released.

“I remember when we were released we were scared to move, and the officer said ‘do you want us to take you back in again?’ Because you’re constantly followed by a police officer, you feel that you don’t deserve freedom anymore. That’s what they make you feel like. I think that’s what Ibrahim felt too, that he couldn’t open a door on his own,” she added.

“You’re not being controlled anymore. It definitely brought back memories of the first day when we were released.

“It’s very sad because when you’re released, as much as you’re happy, it does hit you that you were taken from life and from everything for nothing, because you didn’t even do anything.”

Ibrahim sister Fatima said her family was finally able to sleep peacefully on Thursday night after hearing of her brother’s release.

“It all happened all of a sudden. We didn’t expect that he was going to be released last night,” she said.

“We found out that he was transferred to the Al-Azbakeya police station on Wednesday evening and then there was talk that he was going to be released the next day but ultimately it all depended on the process and the papers being finished,” she told The Irish Times in Dublin on Friday morning.

One of Mr Halawa’s five sisters, Nosayba, has been in Egypt the past month awaiting his release.

“It felt weird because she’s seen him before a few times through prison visits, but I think it’s different when you see someone actually free.

“And I thought if she’s seen him for the past four years and we haven’t, I don’t know how it’s going to be when we finally meet him,” Fatima said.

Fatima said Nosayba had been told he was going to be released at around 4pm or 5 pm on Thursday “but nothing happened”.

“She was standing in front of the police station the whole day and by 10pm we hadn’t heard anything so we expected we probably won’t hear anything until Saturday because they don’t work on Friday.

“Fatima said they heard their father, Hussein Halawa, speaking loudly on the phone and she didn’t understand what was happening.

“Suddenly he was rushing up the stairs and we realised he was talking to Ibrahim. Then I came out of the room and asked ‘is Ibrahim out?’ and he said ‘yes’.

“Then he gives the phone to me and we talk very briefly because the phone has to go around to everyone else,” she said.

“In the morning, Nosayba sent us a photo that Ibrahim took in the mirror. Nosayba was saying that he found it very weird to be able to see himself in the mirror,” said Fatima.

She continued: “In prison, you’re not allowed mirrors inside. So after four years to be able to see yourself, it feels so weird. That’s one of the weirdest things you experience when you’re released.”

On September 17th, Ibrahim, now aged 21, was found innocent and was acquitted of all charges. His three sisters, who were tried in absentia, were also acquitted.

Mr Halawa’s release was delayed due to the slow processing of release papers by the Egyptian prison authorities.

Minister for Foreign Affairs Simon Coveney said he expects Mr Halawa to return to Ireland on Sunday or Monday.