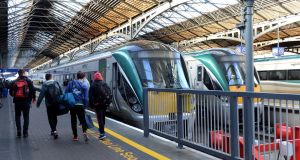 Iarnród Éireann and unions failed to reach agreement after 12 hours of talks at the Workplace Relations Commission. Photograph: Eric Luke

Tens of thousands of rail passengers are facing five days of train strikes over the coming weeks in a dispute over pay.

Unions also warned that there could be further strikes of potentially longer duration in the run up to Christmas if there was no resolution to the pay dispute.

November 14th is the date of Ireland’s World Cup play off game against Denmark in Dublin while December 8th is traditionally a big pre-Christmas shopping day.

There are about 155,000 journeys made each day across the DART, commuter and inter-city rail network

Iarnród Éireann warned it was already “dangerously close to insolvency” with accumulated losses of €160 million and the planned strikes would further weaken its precarious financial position.

The group of unions at the State-owned rail operator announced the strikes on Friday following the collapse of talks with management at the Workplace Relations Commission over pay.

Siptu transport division organiser Greg Ennis said all rail services across the country would be affected by the stoppages.

“The blame for this disputes lies squarely with the chief executive officer (of Iarnród Éireann ) and the Department of Transport who have been intransigent and incompetent.”

“They have left us with no position but to further our case through industrial action as a result of shenanigans which took place late on Thursday at the Workplace Relations Commission.”

The general secretary of the National Bus and Rail Union Dermot O’Leary said his members did not take lightly a decision to go on strike for five days.

“The resolution to this dispute lies with the chief executive of Iarnród Éireann David Franks and the people in the Department of Transport and the Minister who support him.

“If Mr Franks wants to come to the table in the spirit of openness and transparency and makes a credible offer then , of course, we will listen to him .”

Iarnród Éireann said the strikes would reduce its ability to address the pay claims lodged by staff. The company urged that the pay issue should be referred back to the Labour Court.

“Iarnród Éireann remains committed to this process, and to resolving this claim through dialogue, and through the industrial relations machinery of the State. Customers should not be disrupted in any way while this process - set out by the Labour Court - has not yet been concluded.”

Unions had sought annual pay increases of about 3.75 per cent - similar to the rises secured by workers at Dublin Bus and Luas after strikes last year.

The company said it had offered a 1.75 per cent increase for one year, to be facilitated by measures including performance management, absenteeism management, revisions to redeployment policy and payroll.

It said it committed to discussing more substantive productivity issues to fund further improvements in earnings beyond the one year agreement in a defined period.

However unions argued that late on Thursday night at the Workplace Relations Commission, Mr Franks had vetoed a draft resolution to the pay row.

Minister for Transport Shane Ross said: “A pay dispute is a matter to be resolved between an employer and its employees. The State supports them in finding a resolution by offering the services of the Labour Court and the Workplace Relations Commission.”

He urged both sides to use the industrial relations machinery of the Stateto try secure a resolution.

“It is important for the travelling public - and also for the staff and for the company itself - that public transport continues, and that the dispute is resolved in a realistic, fair and sustainable manner.”