European Union leaders met for the second day of a two-day summit to discuss Britain's exit of the EU. Video: Reuters 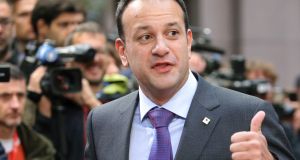 The Irish Government fears that changes to EU rules would mean US tech companies paying less tax in Ireland and more in other EU countries. Photograph: Olivier Matthys/ AP

Taoiseach Leo Varadkar struck a more optimistic note about progress in the Brexit negotiations at the close of the EU summit in Brussels.

He comments echo remarks earlier by the President of the European Council Donald Tusk, who chaired the two-day summit.

EU leaders sought to play down fears that the Brexit negotiations were becoming bogged down, though privately officials insisted that the two sides remain apart and that further concessions, especially on the financial settlement, will be needed from the British.

Speaking at a post-summit press conference on Friday, Mr Varadkar said he would have “a degree of confidence” that sufficient progress could be made by the December summit, enabling the talks to move on to a second phase governing trade and the future relationship between the EU and the UK.

“I’ve no crystal ball so it’s impossible for me to predict the future,” he said, “But I’d have a degree of confidence that we’ll be able to get to the point of sufficient progress by December.

“It’s not that everything has to be agreed . . . we just need to make sufficient progress and I think that’s possible.”

The UK position, he said, was moving closer to the EU position as time went on.

He said the Irish Government would engage in “contingency planning for different outcomes and different scenarios and that is certainly underway”. But he said a “hard Brexit could certainly be avoided”.

Earlier, Mr Tusk said there would need to be a more positive narrative to reach a Brexit deal in December - a sentiment echoed by European Commission President Jean-Claude Juncker. “We have some details but we don’t have all the details we need,” he said. “It’s not my working assumption that we’ll have no deal.”

The Taoiseach also urged Sinn Féin and the DUP to overcome their differences and form a power-sharing administration in Northern Ireland.

“If I was an active politician in Northern Ireland, I would really want to be in an executive and an assembly as soon as possible,” he said.

“Ultimately nobody can force the DUP and Sinn Féin to form a Government – they’re the ones that have to do it.

“But if the guiding principle is doing what’s best for the citizens of Northern Ireland, Catholic, Protestant, no religion, other religion, you would form a government.”

Earlier, Mr Varadkar said he will miss the support of Theresa May when the UK leaves the EU, after the British prime minister strongly backed his opposition to EU moves towards taxing digital revenues and technology companies.

The European Commission is developing plans to compel tech companies to pay more tax in EU countries, which Ireland sees as a threat to its tax sovereignty and corporation tax revenues.

EU leaders discussed the issue on Thursday in Brussels, where Mr Varadkar promoted the OECD process to change the tax rules on a global basis, rather than just within the EU, as some larger EU states favour.

Ireland is concerned that changes to EU rules would mean US tech companies paying less tax in Ireland and more in other EU countries such as France and Germany.

Speaking to journalists as he went into breakfast of EU leaders on Friday, Mr Varadkar said he would miss the UK’s support at the council after Brexit.

“I have to say that once again that I am going to miss the United Kingdom when they leave the European Union. She (Ms May) made some very strong interventions on digital tax and digital Europe yesterday, which were very much in line with our thinking,” he said.

“We were successful in writing into the conclusions the concept that any change to the taxation of digital companies should be done on a global basis, that we should have a global level playing field, using the OECD. And we shouldn’t bring in a tax proposal in the EU that just disadvantages ourselves in relation to third countries,” Mr Varadkar said.

He reiterated that Brexit talks had not yet made enough progress to proceed to the future relationship phase of the talks - something the UK is becoming increasingly impatient about.

He said Mrs May’s speech to EU leaders over dinner on Thursday night was “very positive.”

“I thought it was very good. The language was the right language. It was very strong. She specifically referenced the unique situation both in Ireland and Northern Ireland which I felt was very positive.

“She stayed with that language in relation to the Border; she said that the United Kingdom wouldn’t accept a physical border on the island of Ireland. . . but once again we need to see that backed up by detail.”