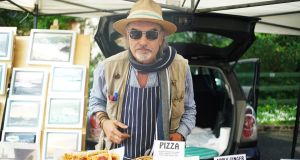 Journalist Ian Bailey has confirmed he was arrested on suspicion of drink-driving by gardaí in West Cork but he later passed an intoxilyser test and was released without charge.

Mr Bailey (62) said he had been driving home from Schull where he had been socialising at about 9pm when he was stopped by gardaí at a checkpoint and breathalysed.

“I was stopped by a Garda checkpoint last night – I failed a roadside breathalyser test and was taken to Bantry Garda station where I passed the internal machine test,” he said.

“I had a very low level of alcohol in my blood and I was released – the gardaí who dealt with me were very courteous and I have no complaint at all in relation to how I was treated.”

Gardaí in Bantry declined to comment on whether Mr Bailey had been arrested on suspicion of drink-driving but the Garda Press Office issued a statement regarding an arrest without using a name.

“Gardaí in Schull have this evening, Sunday 25th August, 2019, arrested a man (60s) in relation to a drunk-driving offence. He is currently detained at Bantry Garda Station.

“Investigations (are) ongoing,” said gardaí in the statement issued late on Sunday night before Mr Bailey was released and returned to his home at the Prairie in Schull.

Mr Bailey, who was convicted in absentia in a French court in May of the murder of Sophie Toscan du Plantier in West Cork in 1996 and sentenced to 25 years in jail, said he is still living in limbo as regards extradition.

“I am amazed – I have been braced for my third arrest for a while now but it hasn’t happened. I haven’t heard anything other than what I read in the media back at the start of the summer when they wrongly convicted me in France. ”

It is understood that the French authorities issued a European arrest warrant in June for his extradition to France to serve the 25-year jail term imposed on Mr Bailey by a French court.

The Department of Justice declined to comment on the matter when questioned about the warrant by The Irish Times, saying that it does not comment on individual cases.

Mr Bailey was twice previously arrested on a European arrest warrant issued by the French justice system and brought before the High Court on both occasions.

Mr Justice Michael Peart granted the order in the High Court but lawyers for Mr Bailey appealed to the Supreme Court which ruled in his favour, overturning the order in March 2012.

In July 2016, Judge Gachon’s successor in the case, Judge Nathalie Turquey, issued an ordonnance de renvoi, summarising evidence against Mr Bailey in relation to the murder. And in February 2017, Mr Bailey confirmed he had been served with an indictment by the judge for the voluntary homicide of Ms Toscan du Plantier in December 1996.

It was ruled that Mr Bailey could not be surrendered, on foot of the 2012 Supreme Court decision which was based on identical relevant facts when the French issued the first warrant.

Mr Bailey has repeatedly denied any involvement in Ms Toscan du Plantier’s death and has also denied ever making any admissions that he killed her at her West Cork holiday home.