Man (34) assaulted in Dublin at the weekend has died 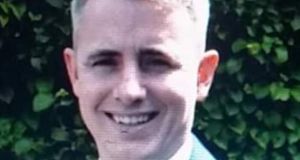 Vincent Parsons was discovered with head injuries by passersby on Saturday night. Photograph: An Garda Síochána

A 34-year-old man assaulted in Tallaght, Dublin, on Saturday night has died.

Vincent Parsons, with an address in the Clondalkin area, was discovered with head injuries by passersby in Killinarden Estate late on Saturday night.

It is understood he had sustained a number of head injuries during an incident in and around a nearby public house where he had been socialising. He was rushed to Tallaght Hospital by gardaí where he was pronounced dead on Monday evening.

The office of the State pathologist has been notified and arrangements are being put in place for a postmortem examination to be carried out.

Louise Dunne, a Sinn Féin councillor representing Tallaght-South, said the local community is “devastated” by the loss of such a young man.

“There is just a huge community outcry over the violent death on our doorsteps,” Ms Dunne said. “The majority of people in Tallaght are hard-working people and it is just a small minority who carry out actions like this [assault]. We want his family to know that we are all in support of them. There are no words to make what the family is going through any easier. We are all absolutely devastated for them.”

“People just can’t believe it. There is no comprehension as to how this sort of thing can happen to a young man,” Mr Duff said. “There’s no place for that kind of violence in our community.”

“I sincerely hope that anyone with any leads will speak with officers in Tallaght garda station so that the perpetrators can be brought to justice,” he added.

Charlie O’Connor, a Fianna Fáil representative for Tallaght-Central, also appealed to the community to help gardaí in any way they can.

“You hear about these things happening all over the country but when they happen right next door you are even more in shock. We are all just in deep upset,” he added.

Investigating gardaí are appealing to those who were in the vicinity of a public house in Killinarden on Saturday night between 10pm and 11pm to come forward. Anyone with information is asked to contact Tallaght Garda Station 01-6666000 or the Garda Confidential Line 1800 666 111.

Separately, two other men are understood to be in a serious condition in hospital after being injured in other assaults in Co Meath and west Dublin over the weekend.

Gardaí said they were alerted at 3am on Saturday to a young man who had been found lying on the ground on Watergate Street in Navan.

The 21-year-old was taken by ambulance to Our Lady of Lourdes Hospital, Drogheda but was subsequently transferred to Beaumont Hospital, Dublin, where his condition is described as critical.

Gardaí arrested a 22-year-old in connection with the matter and he was detained under Section Four of the Criminal Justice Act, 1984, but later released without charged.

Anyone who was in the Watergate Street area between 2.45am and 3.30am on Saturday and who may have witnessed the assault is asked to contact Navan Garda station on 046-9036100, the Garda Confidential Line on 1800-666111 or any Garda station.

Gardaí are also investigating a second serious assault in Tallaght, which occurred in the Cloonmore Green area, at approximately 1:30pm on Sunday afternoon.

A man in his early 30s was seriously injured in the attack, and taken to Tallaght University Hospital, where his condition is still described as serious.

The scene of the assault was preserved by gardaí, and a technical examination has been carried out.