Woman remanded in custody over death of girl (2) in Cork 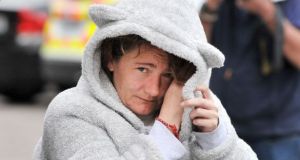 Karen Harrington, who is four-and-a-half months pregnant, made her second court appearance this morning in connection with the death of Santina Cawley. Photograph: Daragh Mc Sweeney/Cork Courts

A 35-year-old woman has been further remanded in custody after being charged with the murder of a two-year-old girl in an apartment in Cork city last month.

Karen Harrington, who is four-and-a-half months pregnant, made her second court appearance on Monday in connection with the death of Santina Cawley.

Ms Harrington was charged at Cork District Court on August 21st with the murder of the child at Elderwood Park, Boreenamanna Road, Cork on July 5th.

At a special sitting of Cork District Court on Monday, defence barrister Paula McCarthy BL said that Ms Harrington had a bail application pending before the High Court on the murder charge.

She said in those circumstances she was consenting to her client being remanded in continuing custody within the next two weeks to a date that was acceptable to prosecuting gardaí.

Sgt John Kelleher said gardaí had no objection to such a remand and Judge Mary Dorgan remanded Ms Harrington in custody to appear again at Cork District Court on September 6th.

At a previous court hearing, Det Garda Cormac Crotty gave evidence of arrest, charge and caution and told how he arrested Ms Harrington at an address at Lakeland Crescent in Mahon in Cork.

He told the court that when he put the charge to Ms Harrington - who is not related to Santina - she replied: “I don’t understand why I am getting charged. I didn’t murder no one”.

Ms Harrington did not speak during Monday morning’s hearing which lasted less than five minutes and was attended by both Santina’s parents, Michael Cawley and Bridget O’Donoghue.

Santina was found with critical injuries at a flat in the Elderwood Park flat complex on the morning of July 5th and was taken by ambulance to Cork University Hospital where she died a few hours later.