Cameraman’s footage would become the enduring image of Bloody Sunday 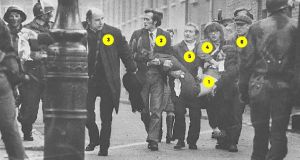 As Jackie Duddy (1) lay dying on Bloody Sunday, Hugh McMonagle (2) spotted a cameraman. “I ran down to him and said, ‘if you’re looking for a great story, follow me’. I was hoping that the British army would stop shooting, that they wouldn’t shoot us when they saw him.”

The footage of Father – later Bishop – Edward Daly (3) waving a white handkerchief as McMonagle and others tried to carry Duddy to safety would become the enduring image of Bloody Sunday.

The 17-year-old was the first person to die in Derry that day in January 1972; when the soldiers stopped shooting, 10 minutes later, 13 had been killed or mortally wounded. A 14th would die later.

“You can see in the photograph that while I’m holding onto the bandage I’m watching the soldiers,” says Glenn. “I thought they were going to kill us.”

A member of the Knights of Malta, Glenn was one of a number of people who ran to Duddy’s aid. “I had a look for the wound and I could see it was bad, he had lost a lot of blood. All you could do was put bandages on it. We were totally unprepared. I didn’t know whether he was dead or not.”

Shooting was going on all around them; Glenn describes it as “being in a goldfish bowl”; McMonagle as “like a gun battle: bang bang, bang bang.”

“The bishop said, ‘If I lead the way, will you follow’,” says Glenn.

The film shows Daly walking ahead, waving his bloodied white handkerchief, while Duddy is carried behind; in the background, the sound of firing. “It was very scary just to stand up,” recalls Glenn. “We were lucky they didn’t kill us.”

Duddy was eventually taken to hospital; McMonagle sheltered in a nearby house. “The shooting outside, it seemed like an eternity.”

He walked the four miles home. “When I got in the door, I don’t mind saying it now, I broke my heart crying.”

In the years since, they have had no choice but to become used to seeing, over and over, their youthful selves as they try, in vain, to save Jackie Duddy’s life. “It wears off, to an extent,” says Glenn. “At the start it was very difficult, and you tried to avoid it. But Jackie’s family, they could never get away from it.”

Later today, Duddy’s family – and those of the other victims of Bloody Sunday – will learn whether or not the soldiers responsible will face prosecution.

According to the 2010 Saville Report, Duddy was “probably” shot by Soldier R, and was running away when he was hit. Among the charges being considered are murder, attempted murder and perjury.

“Go back to Maggie Thatcher, ” says McMonagle. “She said murder’s murder, no matter what. If it was my brother, or my father, I would want the person who committed murder that day to stand in front of a court of law.”

“My opinion has changed over the years, back and forth,” says Glenn. “I’m not a lawyer, but I would say the chance of successful prosecutions are extremely low, if it gets that far.

“Obviously I’m not in the position of the relatives who want to pursue justice for their loved ones, but I honestly don’t know at this stage. I think it’s possibly too late to do any good.”

Today, his thoughts are of Duddy. “I think of him, and the potential there that was gone.”