‘I’ve yet to meet a homeless woman who hasn’t been raped’: Campaigners seek to establish refuge for those assaulted on streets 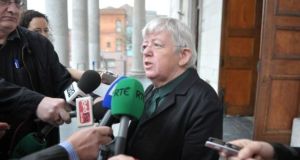 Campaigners behind a new pilot programme in Cork to assist people who have been sexually assaulted while sleeping rough on the streets are confident the scheme could be rolled out nationally to assist others in similar situations.

Mary Crilly of the Cork Sexual Violence Centre and Caitríona Twomey of Cork Penny Dinners have teamed up to get the project off the ground with a view to establishing a refuge for women and men sexually assaulted on the streets.

Ms Crilly said she and Ms Twomey, together with rape survivor Lavina Kerwick, met recently with Taoiseach Micheál Martin in Cork with a view to setting up such a refuge in the city early in 2021 to address the problem.

Ms Crilly told The Irish Times that sexual assault among the homeless was often invisible despite its prevalence among those living on the streets with those with addiction issues being particularly vulnerable.

“I’ve been working with survivors of sexual violence since 1983 and while I couldn’t put a number on it, I would reckon the number of women I have met on the streets who have been raped would be in the hundreds,” she said.

“In fact, I have yet to meet a homeless woman who hasn’t been raped. They tend to say, ‘I’ve lost count of the number of times that I’ve been raped’ and very often the perpetrator is somebody they are friendly with on the streets.”

Ms Crilly instanced the case of one woman she encountered one evening in the city centre who was drinking with two men who tried to rape her a couple of hours later and when Ms Crilly approached her, she tried to play it down.

“I remember going up to her and asking her about what had happened but she said, “I’m grand, girl, I’m grand, don’t worry” – it’s par for the course and the people who did it were seen as her friends.”

Ms Twomey told how one night while on her soup run, she had to pull a man off a woman and that prompted the idea of a woman being able to go somewhere safe and secure after being treated in hospital after the attack.

“What we see on the street hurts us – I remember I was out in the van one night and I had to take a man off a woman – I had to lift him up by the jumper to haul him off her and his pants down around his ankles and it wasn’t nice.”

Ms Twomey echoed Ms Crilly’s view that women sleeping in the streets – particularly if they had drink or drug addictions issues – are very vulnerable to sexual violence, which is all too often ignored or accepted by society

She pointed out that the victims of rape are treated at the Sexual Assault Treatment Unit at the South Infirmary Victoria University Hospital but following treatment, they often find themselves straight back on the street.

“The pattern we see is that when these women and these men are raped and it could be multiple rapes by the same person or by several people, they go to the hospital but they could be back on the street the following night.

“And these are very vulnerable people, some with addiction issues so what we want to do is get a house where they can go and stay and have their own room and be safe and secure whenever they are discharged from hospital.

“We would put in a house mother and it would be a proper home and we will work with them to help them and if they have addiction issues, we will assist them in accessing services to help them to deal with that.”

Ms Twomey said given Cork is such a compact city, a rape victim can very often find themselves facing their perpetrator back on the streets so a refuge would at least spare them being subjected to that particular trauma immediately.

Both Ms Crilly and Ms Twomey said that they were very confident of getting the project up and running this year after a positive meeting with Mr Martin who was very sympathetic and understanding of the problem.