Hundreds of schools closed due to strike action over pay

Several hundred schools across the country are closed on Tuesday as part of an ongoing campaign against a two-tier pay system by the Teachers’ Union of Ireland (TUI). Video: Kathleen Harris 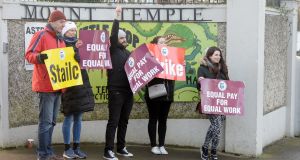 Several hundred schools across the country are closed on Tuesday as part of an ongoing campaign against a two-tier pay system by the Teachers’ Union of Ireland (TUI).

The one-day stoppage will also affect institutes of technology and centres of further education.

The TUI, which represents roughly 19,000 members, claims that a “discriminatory” two-tier pay system is in operation for teachers, resulting in teachers employed after January 2011 earning a starting salary that is 14 per cent lower than that earned by colleagues employed before that date.

The union stated that while there has been some progress in pay equality, teachers employed after January 2011 will still earn some €110,000 less than longer-serving colleagues over the course of a 40-year career.

Latest figures indicate the strike is set to close about 400 of the country’s 700-plus secondary schools.The Department of Education said it was likely that virtually all of the 248 Education and Training Board schools and 96 community and comprehensive schools would be closed.

In addition, at least 45 of the country’s 380 voluntary secondary schools will also shut.

“We have exhausted every avenue open to us to bring this matter to resolution. The overwhelming mandate given to us by members to engage in a campaign of industrial action shows that the resolve of teachers and lecturers on this issue has strengthened,” Mr Lahart said.

“The clear message from our members is that they have been patient long enough and that our actions must now escalate.”

He added: “We regret any inconvenience caused to students and their families but a continuation of pay discrimination risks inflicting further damage on the education system.”

The National Parents’ Council Post-Primary (NPCPP) said it was “disappointed” that the strike action was affecting children’s education.

“Pupils (our children) should not suffer because of any HR dispute. NPCPP emphasise our opposition to any industrial action taking place during classroom hours, lesson time or exams,” a spokesman said.

Members of the Association of Secondary Teachers, Ireland (ASTI) are not taking part in the strike action, and will have to register their attendance at schools in order to be paid, regardless of whether the school is open or closed to students.

In official advice, the ASTI has informed its members that they must be “available for work” in order to be paid.

The Department of Education said an agreement on new-entrant pay, which would see incremental pay increases, was agreed in 2018 and that the Government remains committed to this.

“The matter of new-entrant pay is a cross-sectoral issue, not just an issue for the education sector,” a spokesman for the department said. “The Government supports the gradual, negotiated repeal of the Fempi legislation [emergency fiscal measures during the downturn], having due regard to the priority to improve public services and in recognition of the essential role played by public servants.”

Supreme Court to hear urgent appeal over treatment of profoundly injured child 15:00
Second Covid-19 vaccine could be authorised within ‘days’, says North’s health Minister 14:38
Gardaí should have power to request passcodes for phones and laptops, report says 14:33
Three alleged NI sex offenders who had cases rescinded to be prosecuted again 14:32
Maginnis should be suspended for bullying and harassment, watchdog finds 14:19