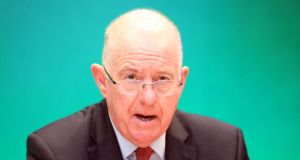 The IHREC said it had written to Mr Flanagan to “set out . . . its determination that upcoming appointments to the Commission should be carried out in line with international standards”. Photograph: Garrett White/Collins

The Irish Human Rights and Equality Commission (IHREC) has told Minister for Justice Charlie Flanagan that an independent process should be run to reappoint eight of its commissioners, including Emily Logan, who is chief commissioner.

It follows a letter from Mr Flanagan to the eight members, whose terms are expiring this year, informing them he would be open to reappointing them for a second term without a competition, if they were willing to put themselves forward. The commissioners’ terms in office are set to expire in October 2019.

However, in a letter sent on August 1st, the commission told Mr Flanagan that “it is imperative that the Government pursue an inclusive and transparent selection and appointment process for the appointment of members”.

Such an approach, the IHREC said, was in keeping with the Irish Human Rights and Equality Commission Act, and was in compliance with international best practice. This included the UN Paris Principles, which were established to assess the independence and effectiveness of human rights institutions. In addition, the European Commission against Racism and Intolerance (ECRI) policies state that “persons holding leadership positions in equality bodies should be selected and appointed by transparent, competency-based and participatory procedures”.

The IHREC said it had written to Mr Flanagan to “set out . . . its determination that upcoming appointments to the Commission should be carried out in line with international standards”.

There was a significant level of interest in the most recent appointment process, which was run last year. Mr Flanagan previously indicated, during a Dáil debate on the matter, that 149 highly qualified individuals had put themselves forward for the positions then advertised.

The IHREC holds “A” status accreditation under the UN Paris Principles, which it says “underlines the commission’s institutional independence, and domestic and international standing”.

Under the statute governing the operation of the IHREC, the minister of the day recommends commissioners for reappointment to the Government and, following the passing of a resolution by the Oireachtas, an individual can be appointed by the President.