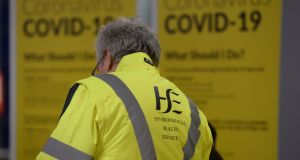 The Government is to reinstate annual leave for healthcare staff who had to use their holidays to mind children when schools and crèches were closed earlier this year due to Covid-19 restrictions. File photograph: Alan Betson/The Irish Times.

The Government is to reinstate annual leave for healthcare staff who had to use their holidays to mind children when schools and crèches were closed earlier this year due to Covid-19 restrictions.

The HSE has in recent days issued a formal letter to senior hospital and health service managemnt on the arrangements following agreement with the Department of Health and the Department of Public Expenditure.

The move had been expected following talks over recent months between health and public service management and trade unions.

The HSE in its letter, dated November 13th, said it was “ agreeable to reinstate annual leave for those who had no alternative but to take leave to care for children” in specific circumstances between March 13th and May 26th of this year.

The HSE said that the Department of Public Expenditure had set out in guidance last April that employers should introduce working-from-home arrangements for staff experiencing childcare difficulties.

In its letter, the HSE said the criteria for the reinstatement of the leave included that it had been taken originally “as a direct consequence of public health advice regarding the closure of schools, pre-schools, crèches and other childcare facilities”.

It said that all alternative options other than taking leave had to have been explored, “for example roster changes, working from home, or any other alternatives, and these were found to be unsuitable by the manager and /or the employee and as a consequence, leave was selected by the employee”.

The HSE said that leave would “not be reinstated where such options were not considered by the employee, and where it can be demonstrated that they willingly” opted for annual or parental leave “without proper consideration of alternative options”.

It said at the time that details on how the new arrangement would work in practice had to be finalised.