Sources rule out judicial resignations: ‘The judges are adults and will behave like adults’ 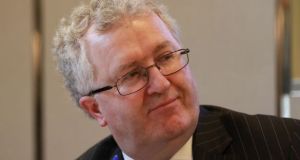 The way may have been cleared for Mr Justice Séamus Woulfe to begin work as a Supreme Court judge after the Government said it would not initiate a process to remove the judge from office.

Following the Government decision on Tuesday, later discussed at a meeting of the board of the Judicial Council, it appears there is no obstacle, barring any possible action by Opposition parties, to the judge beginning work.

Sources believe, if he does so, that will be from February next in line with proposals under an informal resolution process initiated in October.

The Supreme Court is expected to meet in the coming days to discuss the latest developments.

Informed sources expressed strong scepticism about suggestions of Supreme Court judges resigning their positions or refusing to work with Mr Justice Woulfe . “The judges are adults and will behave like adults,” one source said.

A former attorney general, Mr Justice Woulfe was appointed last July but has not sat on the Supreme Court bench due to the controversy surrounding his attendance at an Oireachtas golf society dinner on August 19th.

Attended by 80 people at an hotel in Clifden, the dinner was held the day after the government announced guidelines intended to reduce the numbers permitted at an indoor social event to six persons.

The controversy escalated after the Chief Justice last week published correspondence with Mr Justice Woulfe in which he twice told the judge he believed he should resign over his handling of matters since the publication on October 1st of a review of his attendance at the golf dinner.

The Chief justice said his view, and the unanimous view of all members of the Supreme Court, including the ex officio members, was the “cumulative” effect of Mr Justice Woulfe’s approach has caused “very significant and irreparable damage” to the court and the relationship within it “essential to the proper functioning of a collegiate court”.

The publication of the correspondence lead to the controversy passing into the political arena but, following discussions and advice from the Attorney General, Taoiseach Micheál Martin told the Dail on Tuesday the Government will not seek the judge’s removal.

The Woulfe situation, and the government decision, was discussed generally at a meeting of the 11 member board of the Judicial Council later on Tuesday afternoon.

The council’s functions include promotion and maintenance of high standards of conduct among judges and public confidence in the judiciary. However, due to delays in commencing the conduct provisions of the Judicial Council Act 2019, it has no power to take enforcement action against a judge.

No statement was issued after the board meeting which sources interpreted as indicating the council sees no role for itself in the Woulfe matter.

Ms Justice Denham stressed in her review she was not making findings of fact or of law. She expressed the view Mr Justice Woulfe should not have gone to the dinner and failed to consider the propriety of a Supreme Court judge attending such an event in a public place in the middle of a pandemic. However, she considered he had broken no law, had not knowingly breached any guidelines, seeking his resignation would be unjust and disproportionate and it was open to the Chief Justice to informally resolve the matter.

On October 2nd, the day after the review was published, three Supreme Court judges met with Mr Justice Woulfe who was “shocked” at the resolution proposed by them. A planned meeting with the Chief Justice on October 5th to progress the resolution was deferred three times at Mr Justice Woulfe’s request for personal and medical reasons before being cancelled on October 13th on the basis of a “cogent” medical report.

In correspondence, the judge offered to donate a month’s salary to a charity nominated by the Chief Justice but objected to the basis of a proposed reprimand of him.

In his letter of November 5th to Mr Justice Woulfe, the Chief Justice said, were it not for the judge’s handling of events since publication of the Denham report, and the contents of a transcript of his interview with Ms Justice Denham, he would have proposed certain steps to resolve the matter.

Those were that the judge not sit for three months to February next, waive his salary for that time and accept a reprimand from the Chief Justice on the basis of the latter’s view he had failed to observe the principle judges should obey government guidelines, even where those are non-binding.

Mr Justice Woulfe indicated, in his reply of November 9th, he would be willing to accept a reprimand, not sit for three months and donate his salary to a charity nominated by the Chief Justice during that period.