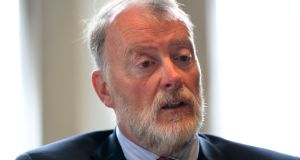 On Saturday, June 25th last year a representative of the St John of God organisation contacted the Health Service Executive out of the blue with a bombshell revelation. An internal whistleblower had given details to a Sunday newspaper of a secret €1.6 million payment made to a number of its senior managers three years previously.

The newspaper had approached the St John of God organisation the previous day about the payments and a story was expected to be published imminently.

Three years after a scandal over top-up payments for senior executives had rocked the voluntary State-funded health sector, and after extensive efforts by the HSE, Department of Health and Department of Public Expenditure to clean up this whole area with explicit new pay rules and new arrangements to police compliance, a new controversy over unauthorised payments was brewing.

Ultimately it would emerge that the controversy at St John of God ran much deeper than the €1.6 million payments.

The whole top-up controversy across the health sector was toxic on a number of levels. Not only did it reveal widespread disregard for Government pay policy among State-funded bodies but at a time of austerity, when pay and conditions for ordinary workers were being severely curtailed, it showed some organisations were prepared to go to significant lengths both to conceal and to maintain remuneration levels for top executives.

Given the seriousness of the John of God revelations, the HSE internal audit unit, which had uncovered much of the broader top-up scandal in 2013, was ordered to carry out an investigation into the payments.

Over subsequent months the HSE auditors, who began by looking into the €1.645 million payments to the group of 14 senior managers at St John of God, ultimately uncovered a far deeper issue of non-compliance with public-service pay rules.

The audit team discovered that top-up payments at St John of God was not a new phenomenon but had been going on at least since 1986 and that non-compliance with pay rules had continued until very recently.

Late last year the HSE was notified of 83 “anomalies” in relation to non-compliance with pay policy and a further 56 came to light as recently as last February. These related not to senior management but to other staff including, for example, instances of local arrangements under which rates for allowances were not reduced in line with financial emergency legislation.

St John of God Community Services is a public-service body. It is technically known as a section 38 organisation just like dozens of others in the health sector such as voluntary hospitals such as St Vincent’s or the Mater.

Its staff are considered to be public servants and its pay policy is governed by rules set down by the Government.

St John of God Community Services had received more than €500 million in State funding since 2012 alone and the auditors were scathing in their findings.

The St John of God organisation is not compliant with public pay policy and its “lack of candour” and continued non-disclosure about additional payments to staff raised fundamental issues of trust, the internal HSE audit concluded.

Apart from the payment of the additional sums to the group of senior managers, the HSE auditors said it was even more concerning that St John of God had between 2013 and June 2016 “many opportunities to make a full disclosure of its non-compliance with public pay policy but did not do so” until effectively after the whistleblower had gone to the Sunday newspaper.

“The breaches of public pay policy identified by the audit, the lack of candour and continued non-disclosure, despite many opportunities between 2013 and 2016 raise fundamental issues of trust between St John of God and the HSE, its funder,” the auditors’ report states.

“The quid pro quo required from organisations receiving taxpayer funding is an organisational culture of transparency, accountability, compliance with all public policies, full candour and full co-operation with the funder and the provision of all information to the funder in a timely manner which faithfully represents the substance of transactions, and not just their legal form. In internal audit’s opinion, based on the findings of this audit, the organisational culture of St John of God did not meet these standards.”

The auditors said the HSE could not place reliance on the official annual compliance statements signed by the board of St John of God for the years 2013, 2014 and 2015. It suggested these documents were “misleading” as the organisation was not observing pay policy in those years.

The audit report found top-up arrangements for senior staff at St John of God had been a feature of the organisation since at least 1986.

The auditors found that at that time there were four managers who were receiving additional pay over the official Department of Health-approved salary rate as well as having access to a private defined-benefit pension scheme.

The number of senior staff receiving additional payments increased over time and had reached 14 by 2013.

St John of God maintained the salary top-ups provided to senior managers were in respect of additional duties they performed for the order over and above their public roles. The HSE auditors contended this meant senior managers were receiving a publicly-funded salary for performing a full-time job but were in effect “only working part time for the publicly-funded section 38 agency”.

In essence the senior managers were paid in two ways: their official Department of Health-approved rate, which was pensionable under a public-service superannuation scheme; and a separate additional payment which was not pensionable.

The audit said the full amount of the salaries of the managers concerned was paid through the St John of God exchequer-funded payroll until June 2009. The order said it paid for the additional top-up amounts itself.

The significance of 2009 was that about that time the government introduced a public-service pension levy for State employees under emergency legislation introduced following the collapse of the public finances.

The pension levy in reality had little to do with pensions. Some staff across the public service who did not have pensions had to pay. In essence it was the first public-service pay cut.

The audit maintained that the St John of God order considered the application of the pension levy to the full salary to the managers in receipt of the top-up arrangements to be inappropriate as they were not making pension contributions in respect of the additional salary and would only secure pension benefits on the State-approved element of their remuneration.

“For this reason, the provincial of the St John of God decided to establish an order payroll – a private payroll – on which the non-pensionable portion of the directors’ and chief executive’s salary was paid.”

The audit said the gross value of the additional salaries paid to the 14 senior managers through the private payroll annually was in excess of €478,945 or more than €528,000 when employer’s PRSI was included.

The top-up arrangements at St John of God were not unique. Similar additional pay and perks were secretly being paid to executives at a host of other voluntary hospital and healthcare organisations.

However, time was running out on these confidential arrangements. Rumours had been rife in certain quarters for years about the true scale of remuneration in some section 38 bodies but the full picture did not emerge until a HSE internal audit of top-level pay across the sector began in 2012.

In September 2013 The Irish Times reported that the then unpublished report had discovered executives at State-funded voluntary hospitals and agencies were receiving more than €3.2 million in allowances and benefits on top of salary.

Further details published by this newspaper led to the controversy over pay at the Central Remedial Clinic, St Vincent’s healthcare group and elsewhere in the health sector.

In September 2013, on foot of the HSE findings, the Department of Health issued new rules that specified that section 38 organisations were not permitted to supplement approved rates of pay using either exchequer or non-exchequer funding.

In November, as the storm over top-ups continued, St John of God engaged financial advisors and sought to address its non-compliance with pay policy.

In late November 13 of the 14 managers had their salaries on the exchequer -funded payroll increased to take account of the value of their previously-private top-up arrangement. These salary rises ranged from 5 per cent to 48.5 per cent.

The full salary was now subject to both the pension levy and pension contributions from that point. The cost of the increased salary was funded by a management charge to the Hospitaller Order of St John of God Western Europe Province. In essence it was privately funded but the audit said no approval was sought from the HSE for these salary increases.

However, a compensation scheme was also devised for the managers under which they received lump-sum payments through a private payroll totalling €1.829 million (including employer’s PRSI) which was subject to tax.

St John of God told the auditors the compensation was paid to buy out a potential risk that the State would pay pensions to the managers concerned only on the lower approved portion of their salary and not the full amount.

However, the audit concluded that the managers were compensated for having to pay the pension levy and make pension contributions in respect of their previously topped-up salary until their retirement – up to 22 years away in some cases.

The audit said this had the effect of transferring significant potential pension risk on the privately-funded element of the increased salary away from the order and on to the taxpayer.

The audit linked the move by St John of God to eliminate the risk of liability for future pensions on the additional payments to rules imposed by the Vatican on a restructuring of the order.

“In 2012 the order had received canonical approval for its restructuring, a condition of which was that all liabilities had to be provided for and no risks could remain. The Vatican wanted to be sure that no liability transferred to the new organisation,” the audit concluded.