Show gardens with a political, ethical and musical twist at Bloom festival 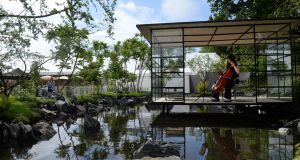 A full-sized piano is not a piece of garden furniture in the classical sense but for one of Bloom’s competitive designers, it was just grand.

Ahead of the opening of the 11th Bloom festival in Dublin’s Phoenix Park on Thursday morning, the seven-acre site was a hive of activity with stallholders putting the last licks of paint on their purpose-built displays which have sprung up over the last month.

Much of the focus was on a small group of stern-looking judges who wandered from show garden to show garden quizzing the 22 design teams about their creations.

The baby grand piano was to be found in the Composer’s Retreat, the brainchild of garden designers Kieran Dunne and Anthony Ryan. Their musical oasis also featured a steel guitar and other musical instruments dotted around a lush green landscape and served a dual purpose of showcasing their skills and promoting Our Lady’s Children’s Hospital in Crumlin.

Most of the show gardens came with a health, ethical or political twist. Oxfam and Goal had a display which suggested that knocking rather than building walls was the way forward. The FBD garden warned of the cataclysmic consequences of global warming, albeit in a gentle and soothing way with a platform in the centre of a pond which ebbed and flowed like the tide.

Teagasc had linked up with Pieta House to create a mental health garden while the message from the Marie Keating Foundation’s garden was aimed at men. It encouraged them to take their health seriously and not allow cancers to take hold out of a reluctance to go to their doctors.

Former rugby player and long-standing sports journalist Tony Ward was on hand to give the foundation a hand spreading the word.

“Too many men don’t get themselves checked out enough and they don’t share their concerns with other men,” he said. “I don’t know why that is.

“Maybe it goes back to when we were hunter gathers and wanted to portray a strong and fearless demeanour. The reality is it takes guts to go to the doctor and it is not a sign of weakness”.

The Friends of the Earth display will be buzzing over the course of the five-day event as their garden showcases the many ways householders can help bees by providing food, shelter and healthy ecosystems in which pollinators can thrive.

The garden was designed by permaculture expert and 2015 RTÉ Super Garden finalist, Suzie Cahn, and will be staffed by more than 50 Friends of the Earth volunteers throughout the five-day festival, who will provide advice on bee-friendly gardening.

While Friends of the Earth were taking care of the insect kingdom the Dogs Trust will be looking after man’s best friend in the first ever dog-friendly garden at the festival. Their garden features a host of simple but innovative ideas designed to provide fun and stimulation for dogs while maintaining the garden as a safe, relaxing area for the whole family.

In addition to the show gardens, there are also 13 postcard gardens designed and constructed by amateur gardeners from across the country.

These “small but perfectly formed” gardens are said to provide an opportunity for garden clubs and societies to demonstrate their abilities and to inspire other non-professional gardeners to experience the joys and benefits of gardening.

Visitors can also look forward to 50 floral and botanical art displays and 110 food and drink stands which will keep the tens of thousands of people who will pour through the gates sated over the course of their visit.

RTÉ has one of the biggest displays on the site and will be broadcasting live from its specially constructed mobile radio and TV studio and live performance area on site. There will also be live weather reports which will probably draw the largest crowds as an outdoor festival like Bloom can live or die depending on the weather.

And what is the forecast? It is set to be “quite changeable over the five days of the festival”, according to Met Eireann, with a mixture of dry bright intervals and scattered showers.