How common are fire safety issues in Irish apartments?

Q&A: St James’s Wood is far from the only development with serious fire safety issues 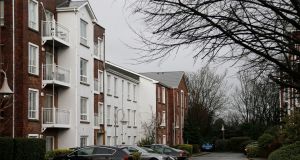 How common are fire safety issues in Irish apartments?
Defects like those seen in St James’s Wood in Kilmainham, Dublin 8 are unfortunately very common throughout developments built during the Celtic Tiger. The industry was “working at a very high capacity; skill sets were in short supply and these things got through the net,” chartered surveyor Noel Larkin says. The Society of Chartered Surveyors Ireland said around the time of the Grenfell tragedy that it was aware that these issues existed in many places around the city.

How did apartments secure a fire safety certificate when they were not built to standard?
Fire safety certificates were (and still are) granted by the local authority based on plans submitted before the development is ever built. Under the old building regulations, there was no required follow-up to ensure the complex was built to the standard that was promised in the plans.

Do the new regulations solve this problem?
New regulations were introduced in 2014 which required on-site inspections by an assigned certifier as part of a formal inspection plan. However, there are gaps in this. The certifier is appointed and paid by the builder, meaning in essence it is a system of self-certification.

Why did the builders not build to the required standard?
It was not out of malice or for cost-saving reasons, but often out of pure lack of knowledge and because the construction industry was going through a period of such intense growth. For example, the cost of installing things like intumescent wrap around waste pipes at the time of construction is minuscule in comparison to the cost of ripping up floor tiles, baths and toilets to put it in after the development is finished.

Why are the developers not liable?
In the case of St James’s Wood, the statute of limitations in such matters means the residents face little chance of legal success, according to Lydia Bunni, a barrister who specialises in construction law. She said residents have six years from the time a fault becomes “manifest” to take legal action. “Arguably the damage became manifest at the time those apartments were built, in 2000,” Ms Bunni said.

Do you know of a building with serious defects? Tell us about it

What are the most serious fire safety issues?
Functioning fire detection systems and fully operating emergency lighting are top of the list of essential fire safety measures. After this, the presence of compartmentation and fire-stopping detail is key – and can be much more expensive to remedy after construction. Each apartment, hallway, lobby and stairwell needs to be able to contain a fire for one hour, giving residents in other areas of the building time to escape before fire or smoke spreads. When fire-stopping detail is missing throughout the development, it means the place could burn down faster than residents are able to get out.

“That was one of the contributory factors to the speed of the smoke spread in Grenfell [Tower in London] – when the building was refurbished, the apartment layouts were reconfigured and the compartment walls were breached by services,” Orla Hegarty, an architect and an assistant professor at the UCD school of architecture said.

“When they put in those new walls they didn’t close off those gaps so that’s why smoke and fire spread much more quickly than it should have.”

What is fire-stopping detail?
It takes many forms, such as intumescent wrap, which is placed around pipes and expands in the event of a fire. It fills the gaps in the walls and in the shafts that pass from high-level apartments right down to the ground floor, such as waste pipes. Airducts should also have fire-stopping detail which expands to fill a gap in the event of a fire.

What powers does the Fire Officer have if my apartment block is inspected?
The Fire Officer has the power to close the building down if they think it is serious enough to warrant it. This, however, is uncommon. In the case of Longboat Quay in Dublin’s docklands, chief fire officer Patrick Fleming did not close the complex down but ordered remedial work to be started “as a matter of priority” and stated that failure to comply with the fire notice could result in evacuation of the building.