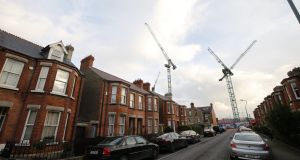 The completion of the new national children’s hospital is to be delayed by a further nine months, despite the €1.4 billion price-tag of the project newly approved by Government.

The long-awaited hospital is now expected to be ready in August 2022, with the extra months of construction costing an additional €90 million, it emerged yesterday.

The final cost of the project is almost certain to rise further, as contractors will be able to pass on some of the costs arising from high construction inflation after next year. The cost of IT services is also additional, and will come from the HSE budget.

Taoiseach Leo Varadkar confirmed the projected cost of the hospital is now €1.433 billion – almost twice the €790 million estimated when the project was relocated to St James’s Hospital – and conceded costs could rise further.

Mr Varadkar admitted the project could turn out to be the one of the most expensive children’s hospital in the world, but promised it would be the best.

He was speaking in the Dáil after Cabinet gave the go-ahead for the second phase of the project, the construction of the seven-storey building with 473 single-room beds and over 6,000 rooms.

However, Ministers approved an independent review of the cost escalation “so that any potential weaknesses are identified” in relation to the project and the effective management of public monies.

Minister for Health Simon Harris expressed “great concern” over the additional costs and called for “assurance” that the rest of the work will be delivered “within budget and timescale”.

Members of the project team expressed surprise at the escalating cost but defended their approach at a briefing held on Tuesday to explain the overrun.

Tom Costello, chairman of the National Paediatric Hospital Development Board, said he was “not comfortable” with how the price had escalated but insisted the tendering and construction process adopted was “robust” and in line with best practice internationally.

“It’s an expensive hospital but on a cost per square metre basis it’s not the most expensive,” project director John Pollock said, though he added it was “at the upper end”. The cost per bed is €1.8 million, he said.

Greater detail in the design of the project added €90 million to the cost, while increased spec for items such as handbasins and theatre lights added €21 million.

The insistence by An Bord Pleanála for sprinklers throughout the building, and changes made after the Grenfell fire, added €27 million to the cost. Meanwhile, only €20 million out of projected savings of €66 million were made, project costs increased by €36 million, and Vat by €50 million.

Mr Costello said there was a “huge shortage” of skilled construction workers, and this was pushing up costs.

The option of putting the second part of the contract out to tender again was considered and rejected, as this would have extended the completion date by up to two years as well as increasing costs by €305 million.