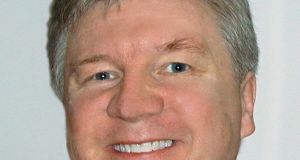 Michael Nugent, chairman of Atheist Ireland, says the Irish law on blasphemy is used by regimes overseas to defend persecution of minorities.

Atheist Ireland has urged voters to remove the “medieval” offence of blasphemy from the Constitution in next month’s referendum.

The ballot takes place on October 26th on the same date as the presidential election.

Launching its referendum campaign on Sunday at Dublin’s Garden of Remembrance, Michael Nugent, chairman of Atheist Ireland, said Ireland is a different country to what it was when the constitution was written in 1937.

“But we still have a blasphemy law, introduced 10 years ago because of the 1937 Constitution, that makes this medieval concept a criminal offence that is punishable by law,” he said.

While effectively unenforced in Ireland, Mr Nugent said the Irish law was used by regimes overseas to defend persecution of minorities.

Citing the case of Asia Bibi, a Pakistani Christian mother who faces execution after being convicted of blasphemy, he said the Pakistan government used “wording taken directly” from Ireland’s blasphemy law to defend itself at the UN.

“Professor Heiner Bielefeldt, the then United Nations Special Rapporteur on Freedom of Religion, advised us during our lobbying for this referendum that ‘of course you are right that the major damage done by this legislation is the international one’,” he said.

Mr Nugent said Prof Bielefeldt didn’t expect harsh verdicts being handed down in Ireland “but those countries that continue to have an intimidating anti-blasphemy practice like to quote European countries to unmask Western hypocrisy.”

“Please send a message to Asia Bibi, and to her captors, and to the other people illustrated on our campaign posters, by voting to remove the blasphemy clause from our Constitution on October 26th,” he added.

Last year, a complaint was made against British actor Stephen Fry for making critical comments about God during an interview on RTE.

Although a criminal investigation was launched, no prosecution was brought.