Hotel fire: ‘We were just standing and crying and trying to calm down the kids’ 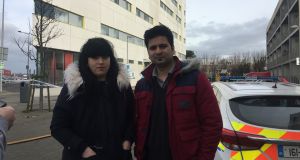 Anita Doktere (left) and her partner Adeel Bashir at the scene of the fire on Thursday morning. Photograph: Mark Hilliard 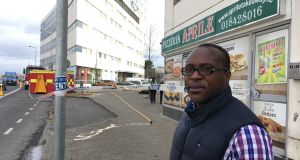 Head chef Samuel Opoku, who was working in the kitchen when the fire broke out, at the scene of the fire on Thursday. Photograph: Mark Hilliard

Standing outside the Metro hotel in Ballymun in freezing wind on Thursday morning, a young couple who lived in one of the apartments above the hotel said they had lost everything.

On Wednesday night, Anita Doktere found herself standing on the road outside with her two children Javeria (7) and Saira (5), all in tears as they watched their home on the 13th floor become engulfed in flames.

“We were just standing and crying and trying to calm down the kids,” she said.

“She is still crying, all night,” said her partner Adeel Bashir, who was working overnight and “came home to this” at about 5am.

The family had been renting the apartment in the north Dublin complex for three years. Mr Bashir had just got off the phone with his landlord who said he would try to help but the couple must now try to find a new home.

“It’s completely gone,” said Ms Doktere. “What about tomorrow? What after about a week, because all our lives stayed up there you know, we have nothing without it.”

As the emergency services worked behind the cordon around the fire-ravaged hotel, Mr Bashir said his children had to stay with a friend on Thursday. “We don’t really have any place to stay…a family of four people, it’s not easy for anybody to accommodate us,” he said.

All morning, hotel staff and guests gathered outside the hotel, trying to get their belongings.

Head chef Samuel Opoku was working in the kitchen when the fire broke out .

“One of my colleagues said there was a fire so we organised the staff to begin an evacuation and we all came out of the building,” he said. “We handled everything very well. No panic.”

The majority of hotel guests were believed to have been in the restaurant and bar when the fire broke out, making the evacuation more straightforward.

However, a number of guests were critical of the management response once people were outside.

Anthony Black from Tipperary Town was staying the night before attending his uncle’s funeral on Thursday morning. Standing outside the hotel in his funeral suit - his other belongings were still inside his room - he said he and other guests were left to find their own alternative accommodation.

“We were above in the room and we came down for a meal. The fire brigade came in and said to get out of the hotel,” he said. “Everyone seemed to be calm…people walked out the door. There wasn’t any panic.”

However, he said his party of nine had no choice but to find another hotel themselves, eventually checking into a nearby Travel Lodge. Others, he said, had gone into the city.

One of his travelling companions, Bernie Mirza, said nobody from the hotel had checked with them after they had gone outside. “[WE ARE] very, very disappointed. As of 20 minutes ago there is still no response from the hotel,” she said.

“You were worrying in case anyone got left inside,” said Josie Kiely from Tipperary Town. “The fact that everyone got out safe; that was the main thing.”

James Colunga, a former police officer from the US, was standing outside wrapped in a wool blanket. He and his wife Dianna, who had been travelling around Ireland, were also trying to get their belongings back and had so far missed two flights to Germany.

“I’m from Texas. It wasn’t scary, we have brush fires that are bigger than that but the thing is it was big and it could have got real bad and it was lucky nobody got hurt,” he said.

“We were eating in the restaurant and while we were eating, we first thought it was just a car crash out front. Then a fire truck showed up and everyone kept looking up. Then a fireman walked in and said everybody out.

“We didn’t think it was anything much…but it got worse and worse.”