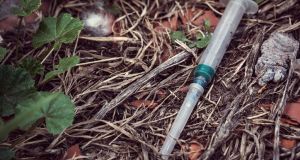 Repair works could not take place for some time on a section of rail line in Dublin because of discarded syringes in the area. Photograph: Getty

Repair works on a section of rail line in Dublin were delayed for several months last year because the number of discarded syringes in the area made it impossible to carry out the job.

The area in question was a stretch of rail track near the derelict lock-keeper’s cottage at the Royal Canal, close to the North Strand Road, on the north side of Dublin city.

Syringes had been cleared from the spot on a number of occasions but the problem persisted and made the required work very difficult, according to minutes from last September’s meeting of the Dublin City Canals Royal Canal Development Group.

The work eventually took place in mid-December after vegetation and a hoarding was removed and after Irish Rail liaised with a nearby addiction clinic.

The minutes of the September meeting said an Irish Rail representative “stated that he has to replace a stretch of rail line at the lock-keeper’s cottage. However, there are a huge amount of syringes in the area which makes it very difficult to carry out the work. [The representative] has had the syringes cleared on at least three occasions to date but it remains as bad as ever.”

The minutes said staff from Irish Rail and Waterways Ireland would “visit the site so that they could review the area and to try to secure the site as quickly as possible in order for Irish Rail to progress their repair work”.

An Irish Rail spokesman told The Irish Times that “vegetation was removed from the areas and a hoarding that drug users were sheltering behind was removed and replaced with fencing, that makes the area more open.

“We were also in touch with a nearby clinic working with those suffering from addiction to explain the issue, and the combination of these activities have seen the number of instances dramatically reduce.”