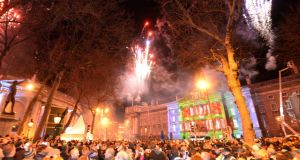 The hospitality industry in Dublin has been dealt another severe blow with the announcement from Fáilte Ireland that the annual New Year’s Eve celebration in the city has been cancelled.

Last year 110,000 people took part in the three-day festival which was watched by a further 80,000 onlookers and involved fireworks displays, live music and illuminations.

Fáilte Ireland said the decision to cancel this year’s celebrations was taken in conjunction with Dublin City Council and its event partners, as well as in the light of the Government’s current Resilience and Recovery 2020-2021 Plan.

The tourism promoter said “given these numbers it is clear that the event would not fall within current Government and public health guidance and it would not be appropriate to encourage people to congregate in these numbers”.

The announcement is further bad news for the beleaguered hospitality industry and comes as The Irish Hotels Federation said 100,000 people may lose their jobs by Christmas, with an estimated loss of 100,000 jobs in the industry already this year.

Tim Fenn, chief executive of the Federation, said 80 percent of visitors to Dublin came from abroad and bookings for New Year’s Eve and into the New Year had “plummeted”.

He said occupancy rates nationally were just 23 percent for October and 12 percent for November, with Dublin faring even worse.

“It is now ‘make or break’ time. Urgent and unprecedented intervention from the Government is required to support tourism businesses and safeguard thousands of jobs throughout the sector. This must form a central plank of the Budget due to be announced next month,” she said.

Prior to Covid-19, tourism supported 270,000 livelihoods, one in ten of all Irish jobs. An estimated 100,000 jobs of these have been lost so far this year and a further 100,000 are at immediate risk without substantial sector specific supports being put in place, the IHF said.

However it said the focus of its efforts “is now on working with Government, industry bodies and tourism businesses on the ground to support them to survive and recover in the months ahead”.

Fáilte Ireland has established a Destination Recovery Taskforce in Dublin that brings together tourism stakeholders from across the region to form a collective response to the crisis.

The Destination Recovery Taskforce is looking at ways to bring life back into Dublin City in a controlled manner that meets public health guidelines while helping businesses to survive and is exploring opportunities to drive footfall in Dublin during the winter months.