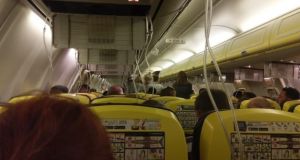 Passenger Miomir Todorovic uploaded a photograph from the inside of the plane, saying ‘I can barely hear my right ear. Important that we survived’.

A group of approximately 30 people who were hospitalised in Germany after an emergency Ryanair flight landing have been offered an 18-hour bus journey to their destination in Croatia.

Many of the passengers who were taken to hospital suffered burst eardrums and have been advised by medical staff not to fly for another week.

Ryanair flight FR7312, due to fly from Dublin to Zadar, was forced to make an emergency landing at Frankfurt-Hahn airport on Friday night after a depressurisation in the cabin.

Conor Brennan (21), one of those passengers who was taken to hospital, described his injuries to The Irish Times.

“Luckily I didn’t have ruptured eardrums, however there’s a severe build up of fluid, mainly blood, behind my eardrums, which will take a number of days to subside," he said.

“I have to remain on painkillers for a number of days and I can’t take any flights for another week or so."

Mr Brennan said Ryanair said it would organise a bus to bring all passengers who had received medical attention to Zadar because they were unable to fly.

He says they had been waiting on this bus for hours but had subsequently been told that it would collect them from the airport at around 1pm Irish time.

Ryanair told The Irish Times  “a small number of customers were transferred by coach”.

Mr Brennan described the chaos which ensued when the plane began to lose pressure mid-air.

“Oxygen masks dropped and then about 20 seconds later the pilot made an announcement that he was going to make a controlled descent. Then we descended really, really fast for about 5 minutes. My ears felt like they were going to explode.

“Then we levelled off and continued descending for about 10 minutes. We landed in Zadar airport, I remained on the plane for about 20 minutes despite requesting medical attention.

“Eventually we disembarked and waited on the runway for another 20 minutes. We were then bussed over to a terminal, where we waited another 20 minutes before we received a medical brief, where they had a look at us.

“There was another half an hour then before I received any kind of actual attention from a doctor, who gave me painkillers. Then an hour after that I was bussed to the hospital.

“There was very little sign if at all of any Ryanair staff there. Airport staff and the German red cross were the only people I could see there who were helping.

“The airport staff and Red Cross did their best to handle the situation, as Ryanair were nowhere to be seen, the first communication from Ryanair was this morning with food vouchers Ryanair.

“They really displayed a shocking lack of empathy for their customers, almost bordering on inhumane.”

Ryanair released a statement on Saturday morning saying: “This flight from Dublin to Zadar (13 July) diverted to Frankfurt Hahn due to an inflight depressurisation. In line with standard procedure, the crew deployed oxygen masks and initiated a controlled descent. The aircraft landed normally and customers disembarked, where a small number received medical attention as a precaution.

“Customers were provided with refreshment vouchers and hotel accommodation was authorised, however there was a shortage of available accommodation. Customers will board a replacement aircraft which will depart to Zadar this morning and Ryanair sincerely apologised for any inconvenience.”