Analysis: the North just might emerge relatively unscathed this year 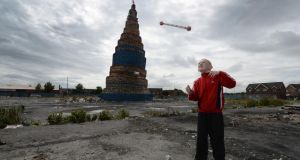 Curtis Walker throws his band baton beside a loyalist pyre on Lanark Way in Belfast as final preparations are made for the 11th night bonfire. Photograph: Charles McQuillan/Getty Images

Unlike last year, and unlike a number of years before that again, there is some hope that Northern Ireland might emerge from this Twelfth of July relatively unscathed.

Several caveats must be entered here and the PSNI certainly are taking nothing for granted. As one police source noted: “You can go from peace to flash to bang very quickly.”

There is a big political dimension to what is happening this Twelfth. The Parades Commission decision to ban Orangemen from parading along a short stretch of road at the Ardoyne shops in north Belfast led to the creation of the combined grouping of unionist and loyalist leaders and the Orange Order.

Some people will be critical of the DUP, the Ulster Unionist Party, the Traditional Unionist Voice party and the Orange Order shaping up alongside the Progressive Unionist Party and the Ulster Political Research Group because of the respective links of the latter two to the UVF and UDA.

Furthermore, the DUP and UUP protesting in tandem with the Orange Order has led to Sinn Féin claims of unionist leaders such as Peter Robinson and Mike Nesbitt “dancing to the tune” of the Grand Orange Lodge.

Down the line there is also the concern that the agitation over a single parade could destabilise and even threaten the powersharing Northern Executive at Stormont.

On Thursday Mr Robinson warned that how this unfolds and how the British government responds could have consequences for how unionists continue to “participate” in politics at local, Assembly, Westminster and Europe levels.

It also has to be remembered that unionists have pulled out of the talks on flags, parades and the past and have pledged further protests in the weeks and months ahead as part of its “graduated response” to the Parades Commission decision.

So, it could all be pointing to political stasis.

But these are problems to be tackled after the Twelfth ends, after the holidays, maybe starting in September. For the moment what the vast majority of people in the North dearly wish for is a fairly calm Twelfth and for the remainder of the marching season to be peaceful. That’s the focus.

So if the unionist parties, the Orange Order and the loyalist paramilitaries don’t want trouble then that is positive omen. It’s even better if Orange marshals and loyalist “community activists” act to keep the hardmen in line this evening. This qualified hope is bolstered by police sources saying that the intelligence is that loyalist paramilitaries don’t want bother this Twelfth.

That doesn’t necessarily mean that some sticks, stones and bottles won’t be thrown but it does mean there is a reasonable chance that those intent on causing disorder can be restricted and restrained.

And if there is trouble the police have a plan. The PSNI will have 3,500 officers policing the Twelfth, 1,100 of them in north Belfast. The water cannon are on standby, the highly experienced police tactical support groups are prepared. In addition, any fired-up potential troublemakers must also consider that last year police reported or charged 700 people in connection with 1,200 parading of flags-related offences, with 560 of them convicted. That could give them pause.

Still, who knows what the unpredictability factor will bring? But, allowing for many caveats, we might get through this day okay. Or, to quote a senior police source: “Yes, we are guardedly optimistic – but with a lot of emphasis on the guardedly.”