By the end of the Battle of the Somme there was 1.2 million casualties and the British army had moved their front line a mere seven miles during the longest battle of World War One. Ronan McGreevy asks 'was it worth it?'. Video: Enda O'Dowd 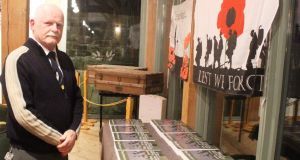 Tom Burnell with all 15 volumes of his series 26 County Casualties of the Great War at the Castlecomer Discovery Park in Kilkenny recently. Photograph: Ronan McGreevy

How many Irishmen died in the first World War? The question is pertinent given Taoiseach Leo Varadkar’s decision to wear a shamrock poppy in the Dáil in the memory of the Irish war dead.

Historian Tom Burnell thinks he has the answer for what is now this State . He lists 29,450 Irishmen killed in the war in his recently published series 26 County Casualties of the Great War.

This mammoth act of remembrance has taken him 15 years. The full series comprises 15 volumes, 8,000 pages and more than three million words. It begins with Private John Abbey from Baltinglass, Co Wicklow and ends with Richard Zimber from New Ross, Co Wexford.

Mr Burnell has used official and non-official sources including the Commonwealth War Graves Commission database, the books Soldiers Who Died in The Great War and De Ruvigny’s Roll of Honour and cuttings from every local and national newspaper.

Mr Burnell said the figure he has collated of Irish war dead is as close as can be ascertained to definitively, but,even so, it does not include a lot of Irish who died in the American army (the records were lost in a fire), munitions workers and the hundreds of Irish civilians, fishermen and merchant sailors who lost their lives in the German U-boat campaign. He reckons the final figure for the 26 counties could be as high as 32,000.

Why embark on such a task which he did entirely on a voluntary basis? “Because no one else will,” he says.

“If I knew the scale of the project, to re-write these records, I would not have continued. It was as if I was guided by some unknown hand,” he says.

“Eventually it was evident that the only way to get peace is to finish the task and complete the 26 counties. It was no effort as the challenge was one that could be done successfully.”

Part of his motivation was to correct the historical record as established in 1923 with the Irish National War Memorial Records.

It lists 49,500 Irishmen who died in the war, but the record is flawed. It also includes non-Irishmen who fought in Irish regiments and excludes the thousands of men who fought and died with the colonial forces such as the Australian or Canadian armies. More than 7,000 men in it are listed without a place of birth and thousands are listed as having died in France though they died in Belgium.

He said he would consider any offer that would allow him collate the Northern Ireland war dead. With a roughly 60:40 split from existing records, it would suggest more than 17,000 men died from the North. The final figure for the whole of Ireland could be close to 50,000.

“It was possible to have completed the 32 counties years ago but try as I might I could not get support from those in a position to do so. I never asked for money, just support,” he added.

However, he was unable to find a publisher for his completed work and he has published it himself.

Mr Burnell was pleased that Mr Varadkar had taken his stand to remember the Irish war dead. “He was leading from the front. Our nation has grown up,” he said.

26 County Casualties of the Great War can be purchased from amazon.com