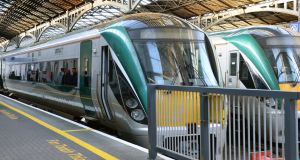 There have been major disruptions to services to and from Heuston station in Dublin on Saturday after a tragic incident on the line. File photograph: Eric Luke/The Irish Times

There were major disruptions to all services to and from Heuston station in Dublin on Saturday after a tragic incident on the line.

Emergency services attended an incident between Sallins and Newbridge in which a person was struck by a train.

Services resumed in the early afternoon as the line had reopened between those locations at reduced speed following the incident.

Later in the afternoon, Irish Rail stated that trains were not at their usual locations due to the disruption, “so there may be changes in capacity to individual services, including reduced capacity”.

“We apologise for the unavoidable disruption earlier, thank the emergency services for their response & support, and customers for their patience and understanding,” the company stated.

Trains would depart Heuston and other terminus stations as soon as possible, it added. “Please go to your station for scheduled time. Knock-on delays can be expected.”