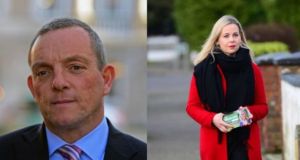 And the winner of the High Dudgeon award for Overreaction of the Week goes to. . . Lorraine Clifford-Lee.

The Fianna Fáil senator experienced a sudden rush of blood to the head on Wednesday when she accused Fine Gael’s Jerry Buttimer of using “misogynistic” and “gendered” language towards her in the course of a run-of-the-mill sideswipe.

When Buttimer, who is Leader of the House, vehemently protested his innocence, Clifford-Lee refused to back down and continued to assert that his remark had been sexist.

Of course, this is what happens when women get the vote and ideas into their heads about standing for parliament. That’s when the rot set in – 100 years ago, precisely.

Centenary commemorations, in full swing for most of the year in Leinster House, have heightened sensibilities among women TDs and senators who, a century down the line, are no strangers to sexist and condescending behaviour from some of their male colleagues.

Clifford-Lee, who is contesting Dublin Fingal in the next general election, has been subject to some nasty trolling on social media recently. She is also a rare thing in today’s Fianna Fáil parliamentary party – a woman.

Micheál Martin is blessed with an Oireachtas team which disproves the axiom that dinosaurs are (a) extinct and (b) very old.

The row blew up during an outbreak of petty political point-scoring between Buttimer (always achingly on message for Fine Gael) and Clifford-Lee over spin doctors and which party can claim the most. Buttimer, who had the floor and was in the middle of his daily response to issues raised by senators during the order of business, attempted a quick put-down.

'Would you say it if there was a man sitting in this seat? That they’re trying to, trying to assert themselves?'

“Senator Clifford-Lee, you’ve used that phrase in the House now a couple of times since you’ve come in and I assure you. . .” countered Butsy.

“That’s gendered,” fumed Lorraine. “I will continue to call out misogynistic language.”

The roaring was well under way at this stage. Fianna Fáil veteran Terry Leyden, hitherto undiscovered standard-bearer of the feminist movement, became highly (and smilingly) indignant on his colleague’s behalf.

“And I can tell you, he interjected, I can tell you, that Senator Clifford-Lee asserts herself all over the constituency where she works and she is an example and inspiration to women in this country.”

Norris tried to close out the argument.

“I am the expert and I exonerate the Leader.”

“I ask senators to direct their comments through the Chair,” implored the Cathaoirleach. As opposed to through that part of their body which sits on a chair.

The Leader of the House struggled to convey the depth of his disappointment, but Lorraine was raging.

“Would you say it if there was a man sitting in this seat? That they’re trying to, trying to assert themselves?”

Leyden, with a grin, accused Norris of siding with Butsy. “You’re collaborating with him now.” Everyone was roaring. The Chair suspended the House.

But the fighting started again.

Buttimer was hard done by. These things happen. Clifford-Lee’s response was over the top

The Leader could let it go without reiterating his disappointment at Lorraine’s comments. “I would ask her to withdraw the remark because I’m not misogynistic.” He was very annoyed.

Because, you see, she was disappointed with his comments.

The Cathaoirleach tried to keep the peace and get on with business. But now Fine Gael’s Gabrielle McFadden was seething. She wanted Lorraine to withdraw her charge.

“She is damaging the cause of women. She should withdraw her remark.”

Then the Fine Gael lads piled in. Neale Richmond and Kieran O’Donnell started shouting the odds and Martin Conway was roaring about “integrity”.

Gabrielle kept calling for a withdrawal, Lorraine was still protesting, Jerry was now very “upset” and the Chair was nearly crying.

Buttimer was hard done by. These things happen. Clifford-Lee’s response was over the top.

But so too was the smug, almost gleeful, response from a lot of male politicians and commentators (who never make a wrong move) radiating their unspoken conclusion that one woman’s misreading of one situation negates everything else said by her and all other women about the routine sexism they encounter in their working lives.

We should never have been given the vote.

Fianna Fáil senator Ned O’Sullivan, champion of al fresco diners having their lunches swiped by sandwich-snatching seagulls who “have lost the run of themselves”, highlighted a new menace this week in the Seanad.

The Listowel-based politician recalled his terrible experience to drive home his point.

“A couple of years ago I had a serious accident in a hotel bathroom where I sustained very serious injuries – multiple breakages and so on. That’s over two years ago – I hesitated to speak about it since because a few people might think I was feathering my own nest with a claim or something, but I understand that the statute of limitations is over.

Since that accident I was approached by many, many other people who had similar accidents in hotel rooms where the shower and the bath was combined in one.”

Ned elaborated. He observed that most new hotels “either put in a separate walk-in shower or, if they have to, they will put in a custom-designed low-wall bath with anti-slip devices in it along with the shower.”

But not all swanky new-builds are so good.

“I was quite shocked recently when I stayed in a very, very well-known hotel – I won’t name it here – and a relatively newly refurbished hotel, and I found myself climbing into a bath, the walls of which were as high as Becher’s Brook.”

“The water jump!” carolled David Norris, carrying on the analogy.

To make matters worse and because it wasn’t designed as a shower, Ned’s perilous tub had “a very narrow, V-shaped bottom on it” which meant that for a person “especially someone of my years, to get purchase . . . you’d have to stand legs akimbo in order not to fall.”

Given the number of accidents this sort of bathroom arrangement has caused, he requested the Leader of the Seanad to ask the relevant Minister, most likely Eoghan Murphy, what plans the Government had to introduce legislation in this area.

“I’m not trying to make trouble for existing guesthouse owners or bed-and-breakfast people, I’m talking about future build and future renovation in hotels and guesthouses; that showers and baths should be fit for purpose and, if they must be combined in one, they should be treated to the most stringent health and safety regulations as regards height, width, non-slip and so on.”

Ned will have spoken on behalf of many hotel guests who have toppled out of baths while having a shower. But he failed to mention one of the main contributors to these accidents – the full-cling shower curtain, grabbed in a vain attempt to restore balance before it detaches from the overhead rail and plonks you on the tiles.

We bumped into Minister for Culture Josepha Madigan at the Fine Gael Ardfheis last weekend and asked her a non-political question.

Where did she get the coat she wore to the Armistice commemoration in Glasnevin Cemetery two weeks ago? We asked because her choice of a green military-style double-breasted coat was commented upon by many who watched the moving ceremony, which was addressed by President Michael D Higgins on the morning of his inauguration day.

It looked like an army greatcoat, the sort of brass-buttoned, heavy wool garment you would have seen on a young soldier marching to the front.

“The coat is very special to me because it belonged to my youngest sister, Edwina, who died in 2016. It was a Whistles” coat and she loved it. I know she would have been absolutely thrilled that I wore it to such an important and significant event as the commemoration.”

Meanwhile, a small drama unfolded on the margins at Citywest as the delegates went about their conference business.

A very friendly and very large puppy lolloped past all the security at the main gates and made its way up the winding drive to the conference centre. It was headed off at the pass by deputy Noel Rock, who tweeted a photo of the enthusiastic bundle of fur before entrusting it to the care of a Garda from nearby Saggart.

'I don’t quite know why you continue to churn out this stuff – admittedly, it was smile-inducing the first time . . . but truly jaded now'

The pup was promptly named Leo.

And it wasn’t very long before its distraught owners claimed him.

The dog’s real name is Biscuit.

Back in the main hall, it was a close call as to which Fine Gael delegate favourite got the biggest cheer of the night. As one would expect, the Taoiseach’s big entrance and big finish had the crowd on its feet. But the traditional favourite, Michael Ring, was a victim of some poor scheduling.

He was way down the list and seemed surprised when MC Mairéad McGuinness called on him from the platform. The Mouth of Mayo rose to the challenge.

“I wasn’t expectin’ to be called so early, but I’m delighted to be here this evenin’,” he bellowed. “But, well, lookit, I’m glad to be here at the Fine Gael Ardfheis and I just want to remind you because sometimes we forget where we were, where we’re going and where we have to go.”

He was winging it.

Exhorting the faithful to get and knock on doors for the party, he roared: “And now we have the best Taoiseach of all: Leo Var-ad-ik-kar . . . We have a jewel in the crown in Taoiseach Var-ad-ik-kar and make sure that he’s back as Taoiseach with your help.”

Purple in the face and crying, the Ringer may have appeared to be overcome with emotion as he spluttered through his speech. But it was just a frog in his throat.

It’s a pity Shane Ross (once a member of Fine Gael) wasn’t there. Because we could have added him to this round-up of the ardfheis weekend and apologised in the process to the Independent Alliance councillor from Waterford who emailed this column on Monday to complain about us continually referring to the Minister for Transport, Tourism, Sport, Stepaside and Judicial Appointments as “Winston Churchtown”.

“I don’t quite know why you continue to churn out this stuff – admittedly, it was smile-inducing the first time . . . but truly jaded now. This is puerile ‘humour’ and unacceptable – imagine the baying we would hear if one of your male colleagues pilloried, say, Kesha [sic] Zappone. So, I would suggest that you grow up and excise the misandry.”

It’s a gender minefield out there. Sorry about that, councillor.

As a token of our contrition we are running a nice photo of your boss, Mr Ross, taken at the Aviva stadium on Sunday night after Ireland beat the All Blacks. We note how he likes to wear his tie long, like that nice Mr Trump.